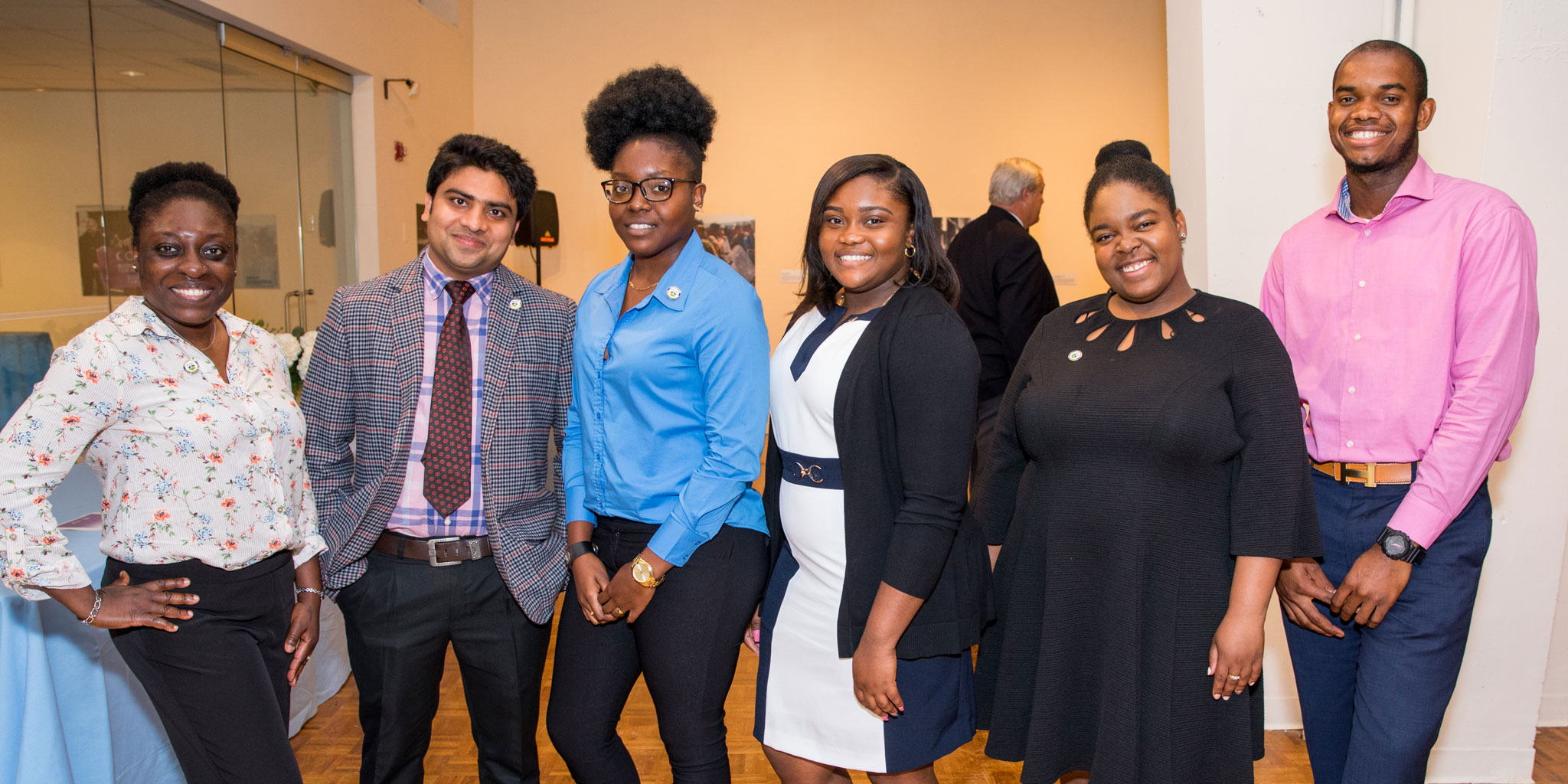 Photo of Lehman students who have benefited from St. George’s Scholarship Program

Since 2008, St. George’s Society of New York has provided more than $900,000 in scholarships for more than 300 Lehman College students. The scholarships have proved invaluable to those who otherwise might not have been able to continue with their education.

On July 30, Lehman hosted an event at the Lehman College Art Gallery, celebrating the decade-long partnership with St. George’s. The event was titled, “A Decade of Transforming Lives.” Six of the new 2018-2019 student scholarships awardees (pictured) were in attendance, along with members of the St George’s and Lehman communities.

“The St. George’s Society is an extraordinary organization that has devoted itself to providing assistance to people of British and Commonwealth heritage for nearly 250 years,” said President José Louis Cruz at the July 30 event.  “The generosity of the St. George’s Society has a profound effect and impact on the lives of our students, opening doors that would otherwise have remained closed to them.”

Lehman College senior Antoinette Bailey, is one of those students.  Bailey, a social work major, came to the U.S. from her native Jamaica when she was just four years old. She said that without the support of St. George’s, she would have had no choice but to indefinitely delay her college education and career dreams.

“Without the scholarship, I would have to put my education on hold,” Bailey said.  “I was one year away from getting my bachelor’s degree and knew that I would no longer receive enough funding from financial aid to cover my tuition.  However, the light did shine at the end of the tunnel, when St. George’s Society decided to believe in me and my dreams, and make me a recipient of their very generous award.”

Bailey is currently applying to the Fulbright Student Program for an English Teaching Assistant (ETA) Award in Kenya. She plans to pursue master’s degrees in social work and African and African American studies, and ultimately earn a doctorate in sociology.

Another beneficiary of the St. George’s scholarship is 2018 Lehman graduate Ahmed-Badawi Siiba.  As a child growing up in Ghana, he witnessed people from his village die from diseases that could have been prevented if they had access to better medical care.

When he and his family immigrated to the U.S., he saw an opportunity  to go to college with hope of eventually attending medical school.  His father didn’t want him to attend college and preferred that he find a job or join the military instead. But the encouragement of a family friend who recognized his potential, helped convince Badawi Siiba that college was the best path to take.

After earning his associate’s degree in Biology from Bronx Community College, Badawi Siiba transferred to Lehman as biochemistry major.  He was awarded a full St George’s scholarship during his senior year to pay tuition and said that the grant allowed him to completely focus on his studies.

He plans to sit for the MCAT’s in the fall and hopes to become an orthopedic surgeon and return to Ghana to set up a free clinic in a village that needs medical care.

Founded in 1770, St. George’s has a rich history as one of the oldest charities in New York. Its mission is to provide financial support for the British and Commonwealth community living in the Empire State.

In addition to the scholarships, the organization also assists the needy, the sick, the elderly,  the impoverished and the homeless.  They provide emergency grants for those experiencing medical crises and offer support to the families of children with neuroblastoma.

St George’s has been involved in providing many acts of charitable kindness throughout its history, including assistance to British war brides in need when they arrived in the U.S., and offering free beds at St. Luke’s Hospital for the ill.

“We are extremely fortunate to have embarked on our scholarship journey with Lehman College,” said Philip Warner, OBE, St. George’s 102nd president. “You have proved to be dedicated, enthusiastic, reliable, accommodating and above all amiable partners, and we place a high value on our relationship with you.”