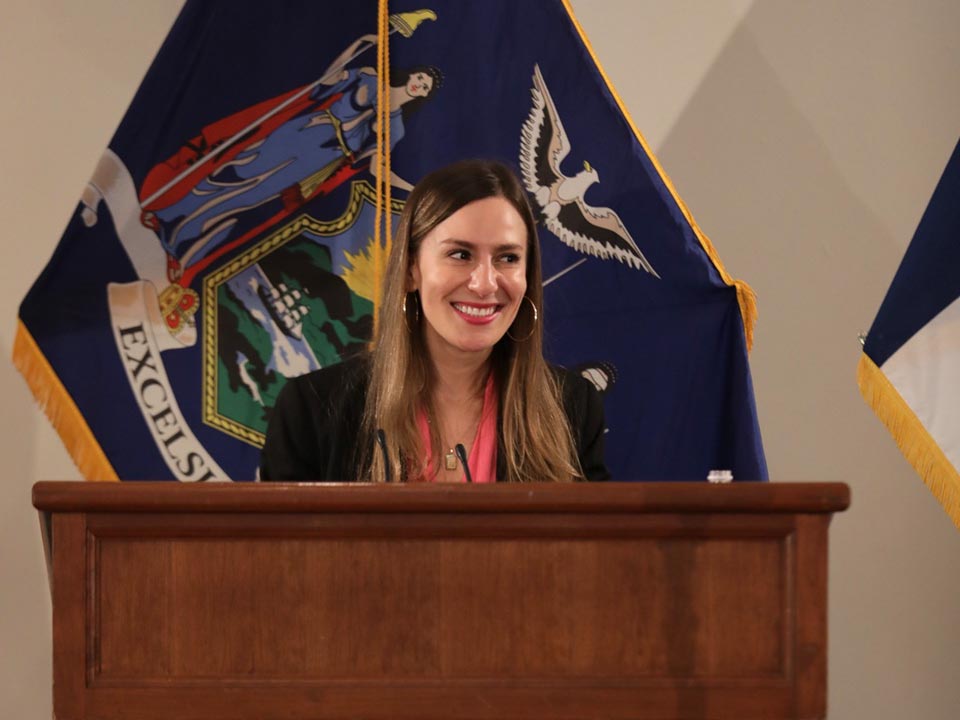 New York State Senator Alessandra Biaggi, one of the political newcomers to win an against-all-odds victory in November 2018, delivered the 50th Annual Herbert H. Lehman Memorial Lecture on May 3.

In her talk, entitled "Courage, Disruption & Resilience: Transformational Politics in the State of New York," she outlined the Bronx roots of her public service and appealed to audience members to fight inequality and oppression.

Biaggi’s election, Cruz added, inspired and mobilized a community that has felt ignored for too long and served as an excellent example of grassroots organizing. He also noted that in the months since taking office Biaggi has advocated strongly for immigrants, health care, and women’s rights.

The granddaughter of the late Mario Biaggi, a highly decorated New York City police officer and U.S. congressman, Biaggi began her lecture by reminiscing how the importance of community service was a frequent topic at the grandparents’ dinner table. She pointed to the discrimination her great-grandparents faced as immigrants to the U.S., and how it became the driving force for her own fight against injustice.

"I’m not one to shy away from a challenge, and I’m not one to shy away from the truth," Biaggi said. "Today, and every day, as a public servant and as a citizen, my job is to elevate the voices of my community—including your voices. For those of us who are awake, it is our responsibility to awaken our neighbors, our friends, our families, and yes, even our elected leaders. The light in each one of our voices is the spark that is needed to identify injustice and propose solutions."

Biaggi spent part of the lecture outlining the disaffection and disillusionment many people feel because of societal systems plagued by structural bias and inequality. The systems can be reinvented, she argued, starting in our communities.

"Acts of change, whatever their scale, matter," Biaggi said. "We should not allow ourselves to be overwhelmed by the enormity of the task ahead. If one person’s life is made better, then our effort is worthwhile. We also need to remember that as strong as the institutional and structural forces may be, they, too, were made by people. And as people, collectively, we have the power to change them."

During her speech, Biaggi expressed support for the mission of The City University of New York, and mentioned that 1,674 Lehman students resided in her Senate district. Before giving the lecture, Biaggi met with members of Lehman College’s student government where she spent about 30 minutes answering questions from the students.

Each spring, Lehman College commemorates the birth of its namesake by inviting a distinguished guest to deliver the Herbert H. Lehman Memorial Lecture and discuss local, national, and international matters that are timely and thought provoking. Ramsey Clark, the former attorney general of the United States, delivered the first Lehman Lecture, and subsequent honorees have included Ambassador Geraldine A. Ferraro, Nobel laureate Jody Williams, and theatrical producer and director Joseph Papp.