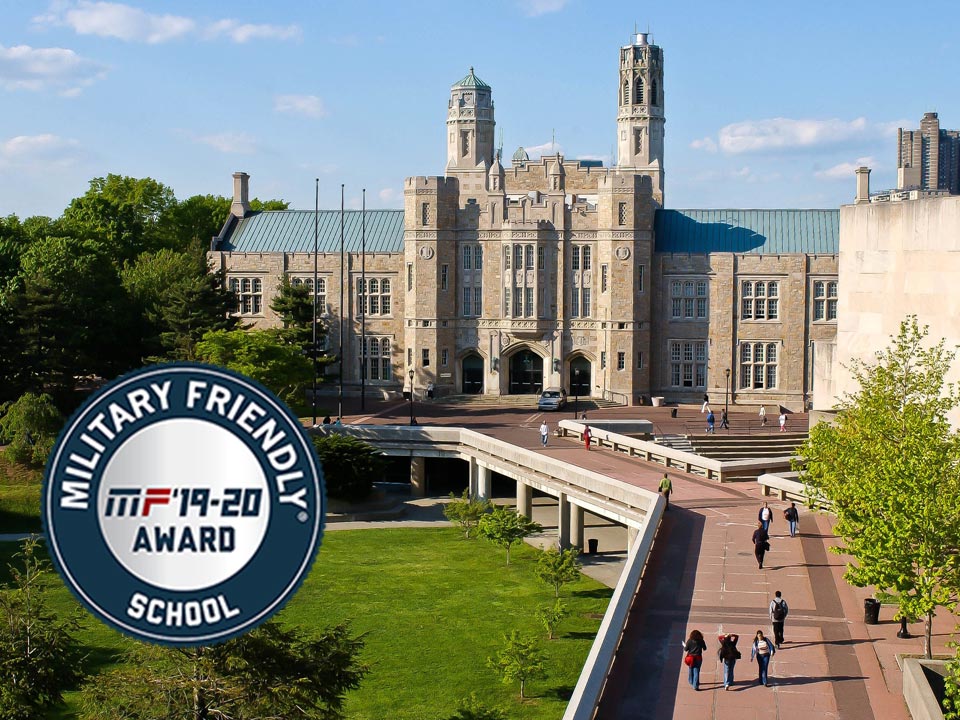 For the seventh year in a row, Lehman College has been designated a Military Friendly School for 2019-20.

It's an honor that reflects on the efforts of the Office of Veterans and Military Affairs and the three staff members, led by former Army vet Luis Soltero-Rodriguez, who are committed to providing a supportive, close-knit community for those they serve.

"This recognition means a great deal because it signals to prospective students that Lehman College is a vet-friendly environment that is going to help them reach their academic goals," explained Soltero-Rodriguez, who graduated from Lehman with his B.S. in computer science in 2009 and his M.S.B. in 2012.

As a former service member and student, Soltero-Rodriguez was uniquely suited for the job as director of Veterans and Military Affairs, which he began in 2016. He skillfully advises returning vets on how to access benefits, keep track of credits earned at other institutions, retrieve transcripts, and land work-study positions throughout the college. That’s just one aspect of his job.

Housed in a former staff lounge, the Veterans Affairs office is nestled in a corner of the second floor in Shuster Hall. It's a small suite that welcomes a steady string of visitors on a daily basis. Lehman alumnus Albert Kiser, '16, was one of those frequent visitors.

"It's a vet-friendly office in every way," said Kiser, who now works as a social worker. "Luis knows how to connect with veterans and he understands that veterans need to talk to others like them. It's a very supportive group."

One of the ways that Soltero-Rodriguez connects with clients is through physical fitness. Kiser, who describes himself as a runner, joined his mentor in training and participating in the Sleepy Hollow Sprint Triathlon a few years ago.

Kiser said it was an amazing experience that led him to other opportunities, like Team Red, White, and Blue, a resourceful networking program that supports veterans as they seek to reconnect to their communities through physical and social activities.

An avid triathlete, Soltero-Rodriguez is active in various competitions throughout the year. On the walls of his office hang medals and photographs from his participation in Ironman and other races. He says he does it to bring public awareness to veterans’ issues and as a way to give back.

"One of the things that helped me when I left the service and I was transitioning back into civilian life was volunteering," explained Soltero-Rodriguez. "It helped ground me." It's a theme that he has woven into the veteran's program.

Through the Veterans Affairs office, students are encouraged to join in group activities, like marching in New York's annual Veteran's Day Parade or visits to the VA Medical Center on Kingsbridge Road, or taking part in various service-projects throughout the borough.

As of Spring 2019, there are 210 veteran and military families at Lehman College.