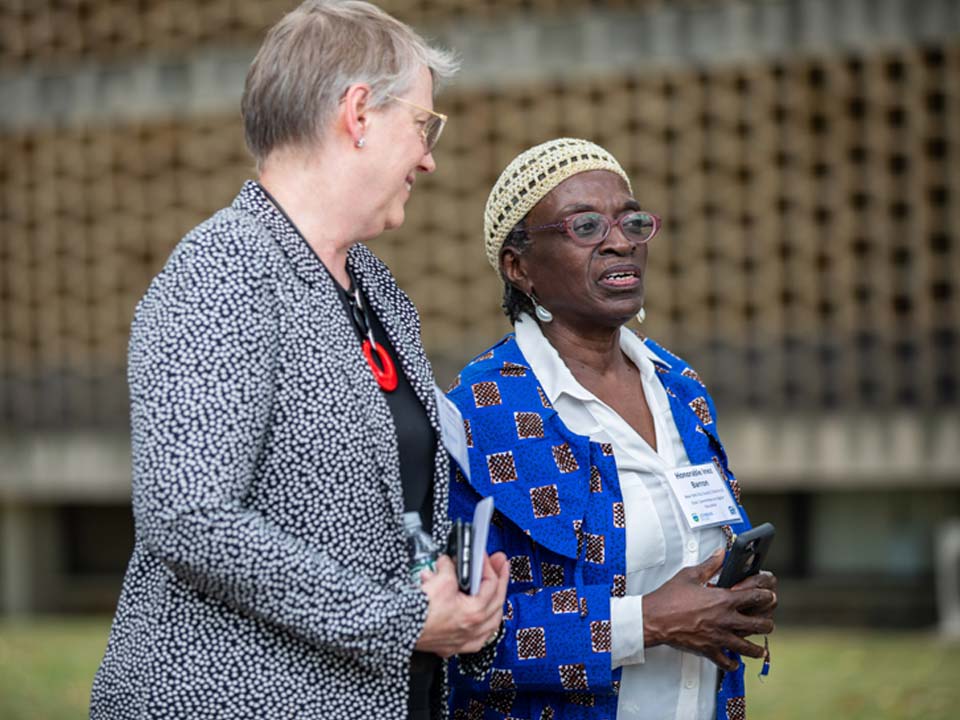 In the last decade, Lehman has emerged as a leader in science, technology, engineering, and math (STEM) education: It offers 11 undergraduate programs in STEM fields, has piloted innovative programs to draw underrepresented groups into STEM, and has world-class labs and two research greenhouses on campus. That has not escaped the attention of the New York City Council’s Committee on Higher Education, which has jurisdiction over CUNY schools. So, instead of holding their usual monthly meeting in lower Manhattan, committee members recently visited Lehman to tour Science Hall, the first of a three-phase complex that will create a “campus within a campus” for the sciences, and learn about STEM initiatives at the college.

“This is the first time we’ve taken a tour as a committee,” said Chair Inez Barron. “We wanted to see what CUNY is doing in terms of STEM, and the absolute best place to go is Lehman.”

At an introductory meeting, Lehman College President Daniel Lemons and Provost Peter Nwosu greeted the committee and described current projects and goals for STEM education at the school. Among their top priorities, they said, is creating opportunities for undergraduate research.

Several federally-funded grants have helped Lehman ramp up its research offerings while broadening the participation of students who have historically been underrepresented in the STEM disciplines. Cheng and Jitianu both noted that their program enrollments have increased. In fact, data Mills included in a presentation before the committee showed that over the past five years, the number of STEM majors at Lehman has nearly doubled, and it is expected to keep growing. In fiscally lean times, however, ongoing financial support of these efforts is critical to their success.

“With additional  financial support, we have the ability to expand our capacity to serve more students,” Nwosu said. “Our students are particularly excited about participating, and so are our faculty.”

Making STEM Accessible
In a brief overview of the School of Natural and Social Sciences, Mills outlined its forward-looking mission, shaped by an ethical commitment to equity and diversity in STEM fields. Inequities—some of which were created by a historical and pervasive lack of diversity in the classroom and the scientific community—will only be solved when more leaders in STEM disciplines come from underrepresented communities, she said.

She added that student diversity and success in STEM don’t depend solely on changing students’ behavior or expanding their ideas about who can be a researcher. The faculty must also focus on outreach and effective recruitment practices.

“As faculty, how do we change what we do to bring our students in?” Mills asked. One way, she said, is to create a holistic learning community of students, graduate students, and professors.

The group then visited the Department of Anthropology to learn about its high-resolution 3D printer, which Barron was particularly interested in seeing. The printer is used to create research and teaching materials, including fossil replicas and reconstructed bones. Raaum and Ph.D. candidate Christopher Smith passed around copies of bones, fossils, and the lower jaw of an ancient hominin.

Walking through Science Hall, Barron and her team visited the rooftop greenhouse, a biology teaching lab, and  two undergraduate general chemistry classes in session. Doning safety goggles, Barron spoke with each of the instructors, both of whom were recent Lehman alumni.

For committee members, one takeaway from the afternoon was Lehman’s success in using active learning to broaden the appeal of STEM education, with a range of hands-on teaching and study opportunities.

Indeed, when Barron noted the high level of student engagement in classrooms, Mills explained that at Lehman, this method of instruction is crucial to maintaining students’ motivation. So is the involvement of recent graduates and more advanced peers in classroom instruction.

“It’s critical that our students see that other students from their background are where they want to be,” said Mills.

See all of the photos of the New York City Council Committee on Higher Education’s visit to Lehman College here.