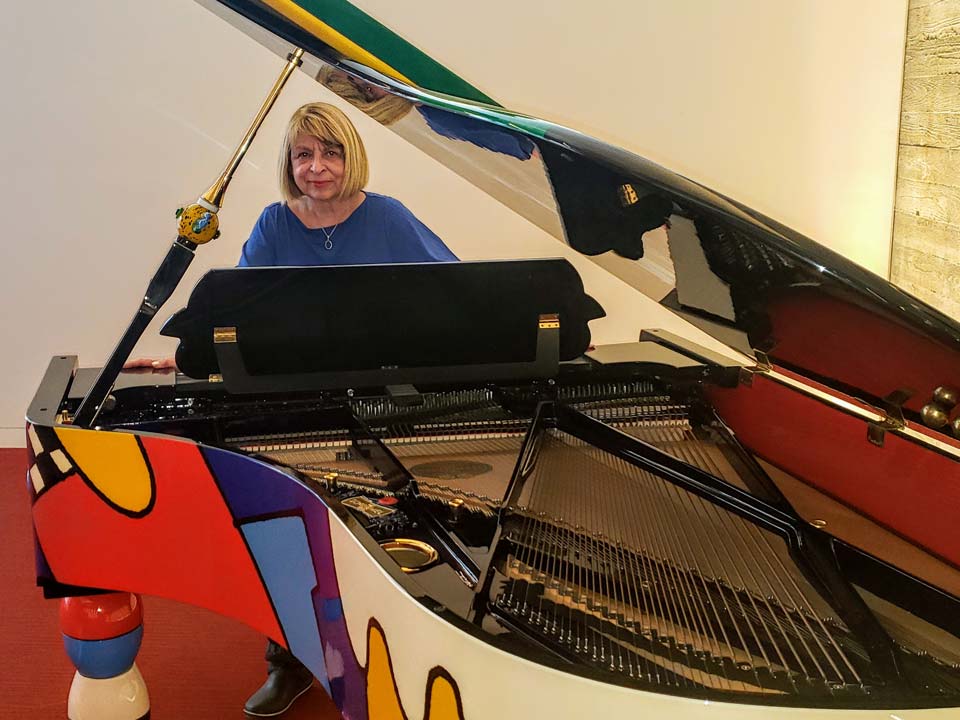 Those looking for the newest piece of public art on campus will find it not in Lehman College's Art Gallery, but in the Lehman Center for the Performing Arts, where the rare and flamboyant piece, created by renowned German sculptor and painter Otmar Alt, sits pedestaled on the second floor.

At 7-feet long and appraised at more than $200,000, the visual art piece is also musical: a custom-designed Schimmel Grand Piano, one of only four such models in the world, which was recently gifted to the performing arts space by New York City resident Joanne Hassler. Alt, a former set designer internationally known for his colorful sculptures, created the piano's stunning red, white, blue, yellow and green case in Braunschweig in 1996. It was later purchased by Hassler.

Last fall Hassler informed the New York charitable community she was interested in donating the piece to a nonprofit; Eva Bornstein, executive director of Lehman Center, quickly made her pitch.

“I figured we had nothing to lose,” Bornstein said. “I wrote her a letter explaining the history and background of the Center and of Lehman College. I also told her about our recent renovation and our expanding role in the community providing access to fine arts and quality performances.”

The Center, now celebrating is 40th season, has brought an array of diverse, world-class entertainers to the Bronx including Ray Charles, Jerry Seinfeld, Prince, the New York Philharmonic and recently the Russian National Ballet.

“There was a huge competition to get this piece, but ultimately I persuaded [Hassler] that the piano belongs in our lobby,” Bornstein said. “In life, you have to be determined and persuasive. If I would have given up, we would never have gotten it.”

Bornstein boasts that the piece reflects the vibrancy and versatility of the 2,300-seat concert hall. And music experts agree: Schimmels are among the best in the world.

“The quality of tone and the sheer playability of their instruments make them an absolute delight for the beginning pianist and for the concert pianist” Music Teacher Magazine recently wrote in a review.

Bornstein said plans are in the works to incorporate the piano into upcoming events.

“This is the perfect piano for a Liberace or Prince show, if they were still alive,” she said. “It's a fun piece, we’re going to invite Mrs. Hassler to attend the first event when we use it. We’re very grateful.”