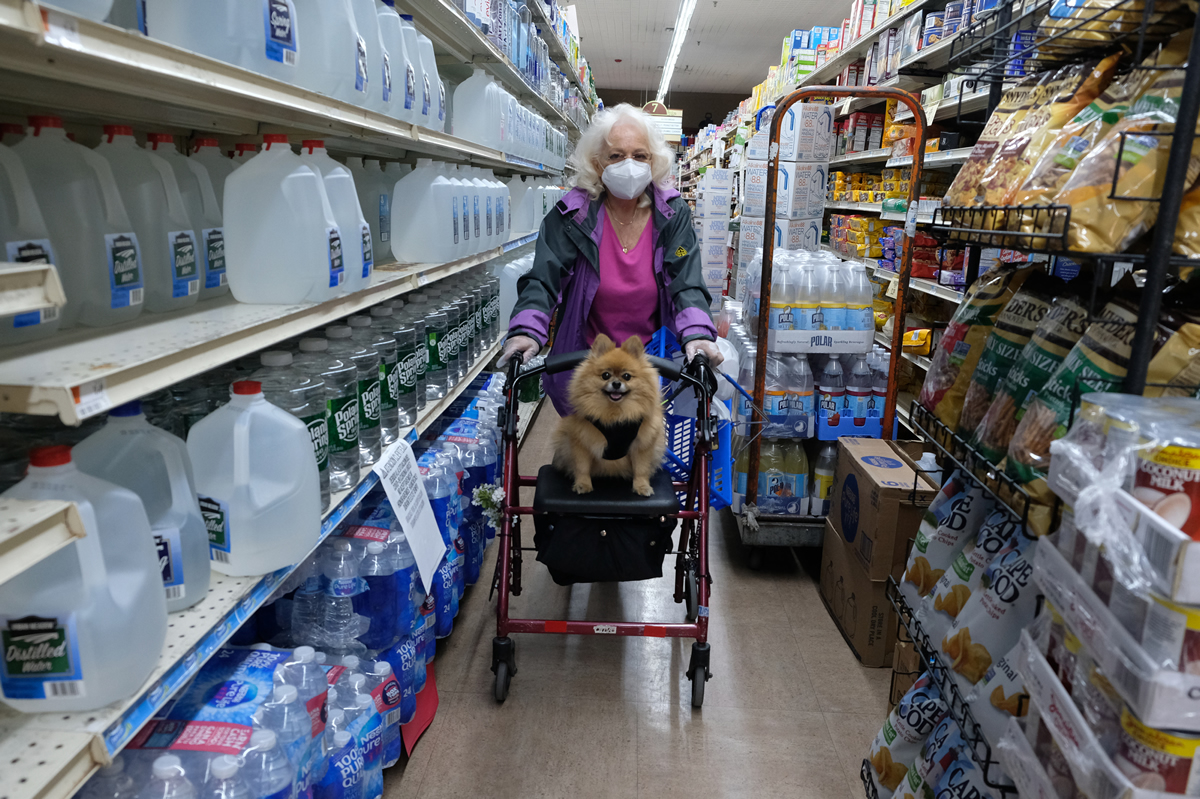 In early March, Lehman College journalism students were learning how to conduct archival research to tell stories of the Bronx’s rich history of activism and preparing for reporting on the upcoming election for New York’s 15th congressional district, which includes northern Bronx and parts of Westchester.

But just as it did for every facet of life across New York city, the pandemic changed all of that. Students who had been studying history were now living and writing it, said Lehman journalism professors Eileen Markey and Christine McKenna.

“We rewrote the syllabus so that the students were now reporting about COVID,” Markey said.

For safety reasons, students were advised not to go outside, but to observe and write about their immediate surroundings and do what reporting they could over the phone. . Some wrote long-form feature accounts about what it meant to be an essential worker in a hospital or a clerk in a grocery store, where the risk of contracting the virus was high, both McKenna and Markey said. Others documented the extended frustrations of seeing loved ones get sick, lose jobs, or experience myriad other ways the pandemic seized life in the Bronx.

“My Bronx students experienced this in a more dramatic way than most people in the country,” McKenna said. “The intensity of the crisis, in some cases, was about life or death. Their circumstances were so severe I didn’t have to worry about hyperbole or exaggeration. Their writing flowed, it was very sharp.”

That experience resonated with editors at The New York Times, which was looking for first-person accounts of COVID-19 life in the Bronx, said Markey. New York Times reporter and 2016 Lehman College honorary degree recipient David Gonzalez suggested Lehman journalism students would be in a good position to provide the sort of reporting the Times knew it needed. 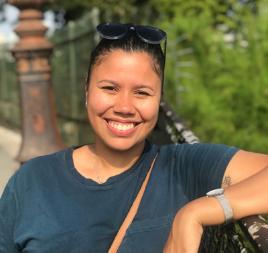 Markey submitted several vignettes written by her students. One of them, by Elizabeth Duluc, was published in the June 14 edition, under the headline: “How the Stoop and the Sidewalk Helped New Yorkers Stay Sane.”

“Seeing my story in the paper about where I live and grew up, you don’t see it too often unless it’s something bad,” Duluc said. “I’m very grateful to my teachers for pushing and believing in me.”

The incoming senior said the experience reaffirmed her decision to pursue a career in journalism, a choice she had been mulling before her piece was published in the country’s paper of record.

“To be honest with you, this last year I fell out of journalism,” the 21-year-old said. “Too much competition, too many good writers. But my voice was published, people will read it--it was definitely re-affirming. I intend to keep writing about the Bronx and my neighborhood. This has opened a whole new chapter for me.”

Ed. Note: We are publishing a selection of student vignettes, along with photographs taken by students in instructor Ricky Flores’ JRN 365 Photojournalism class, below. To read more student accounts of life in the Bronx during COVID-19 as well as student reporting of the crisis and how it affected Lehman’s home borough, visit The Bronx Journal, the online publication of Lehman’s multimedia journalism program. 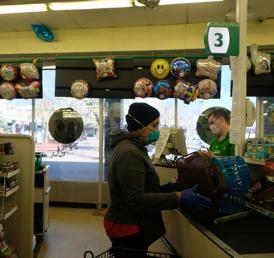 David Acevedo, Crotona, The Bronx
The corner of East 180th and Daly Avenue in the Crotona neighborhood of the Bronx is never quiet. Now, for the first time ever, I was able to open my window without being beset by an onslaught of noise. The residents of this mainly Latino community usually pull up their cars beside the sidewalk and play music so loud that no headset I owned was ever enough to block it completely. 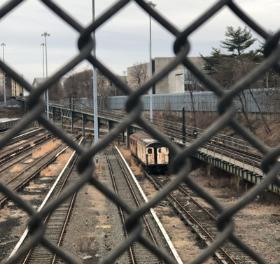 The constant blasting of reggaeton, dembow and bachata was often paired with the shuffling of dominoes and laughter. While I try to do my homework, I hear the creaky iron door that leads into the callejón, an alleyway between two small, five-story apartment buildings. Despite originally being a small junkyard of sorts, my neighbors tend to keep it clean, cleaner than any callejón should normally be. Here, the local children chase each other around, screaming and shouting con tanta alegría that their voices rival the music coming from the cars. The festivities here are almost daily and they carry on late into the night. I always wanted them to stop. But not like this. 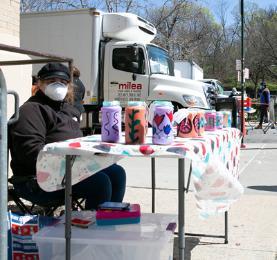 This spring has been eerily quiet, the area the proud and active community of residents once inhabited is now almost a ghost town. The people trap themselves within their homes out of fear of the virus. With the infection rate being 21 percent higher here than the city as a whole, this fear can be seen on the faces of anyone here. The life this place once had, it was irreplaceable, the laughter and music constantly resounding through the air made it seem as if the area was home to a singularity of joy. It was once impossible to feel alone on East 180th, but at least for now, the party is over.

Amman Ahmad, Clason Point, The Bronx
In Clason Point, The Bronx, we pride ourselves on being friendly and close knit. Everyone knows each other in this neighborhood beside Soundview Park in the Southeast Bronx--from the kids playing two-hand touch football in the middle of O’Brien Avenue, to the teenagers dragging their basketball hoops from their gated driveways onto the sidewalk, to the old men playing dominoes on folding tables in front of their houses.

It has all disappeared, everyone in their houses scared to go outside even for a run to the grocery store.

Then, one day, a new way to be together: Roy, 8, is yelling for his friend Derrick in the brick house across Underhill Avenue. In his undershirt, wearing his headphones, the boy sticks his head out of the window. “Add me on Xbox Derrick, let’s play some Madden!” Finally, there’s an interaction between neighbors. 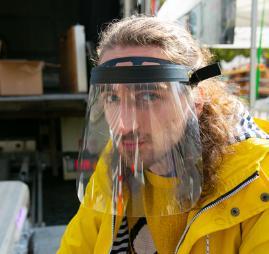 Later, a car blaring Drake rolls down the block. In house after house, young kids in their living rooms push aside curtains, rapping alongside the car as it pauses at the stop sign on Underhill. This is the new normal in Clason Point.

They parked their cars on almost every street corner in the community. Other days, the boys in blue would be on foot or standing in building lobbies just watching and waiting for something to happen. However, the police presence is almost nonexistent ever since the pandemic hit New York City hard. Now the only time sirens are heard in the community is when the ambulance or the fire department are called. 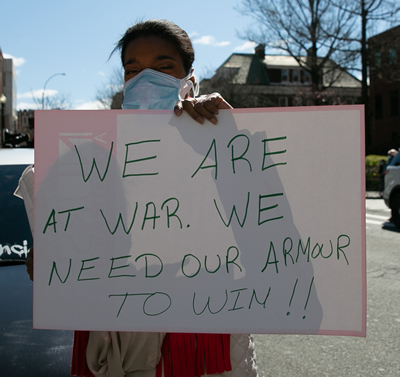 The playground at the center of the Forest Houses was once a place where kids would play freeze tag, jump rope, or draw pictures with chalk on the park grounds. The other day, a woman with two small kids walked towards the park. She stopped to read the sign on the fence: "CLOSED," as the kids were pushing the gate to get it open, she told them in a calm tone, "Sorry kids, the park is closed."

It was difficult to see the kids’ expressions behind the face masks they wore, but by the way they dragged their feet and hung their heads low, one could guess what they were feeling.

Each building in NYCHA feels like a small community. Everyone knows each other and usually greets one another with kisses on the cheeks or hugs. But nowadays you can barely tell who is who with everyone wearing masks and gloves. An elderly woman named Ms. Tee was one who sat in front of the building till all hours of the night, drinking, talking with a large group. Now she never leaves her apartment. 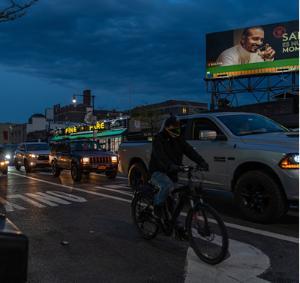 Genesis Ramos, Hamilton Heights, Manhattan
Over the past few years, Hamilton Heights, a quiet neighborhood of Latinos, Africans, and African Americans, has seen an influx of white people. The newcomers make the neighborhood feel strange. During COVID-19, they seem to be less afraid of the virus, gathering for maskless picnics in the park. The longtime Hamilton Heights residents, the elderly, are the only ones following the 6-feet social distancing rule. It seems like Blacks and Latinos are more scared of the virus than white people. But the 7 p.m. shout out for essential workers offers a little bit of unity.

It was a few weeks ago when I first heard the noise: I got scared because out of nowhere people started screaming and shouting out of their windows and balconies. I came out to see what was happening. The neighborhood had been so quiet you could hear a fly buzz by. Then, out of nowhere, it was loud and crazy. It was the 7 p.m. shout out: That moment each day when people go to their windows to clap, slap a pot, or shout in honor of the doctors, nurses, delivery people, supermarket workers, and sanitation people who are fighting this battle for us. At 7 p.m., it feels like New York City is alive again. Tonight, what started with a simple clap, finished with people putting their speakers in the window to blast the songs, “Shout to the Lord,” by Darlene and “We Are the Champions,” by Queen. Everyone becomes part of this event. We might not be physically together, but people scream out as if they shared one same heart and throat. Some people come out to the sidewalk, others are on the rooftops, they’re in their cars or just walking. It gives me hope. The hearts and minds of every single person are more alive than ever.

Jennifer Rodriguez, The Bronx
Since the outbreak of the coronavirus, at night when I am up doing homework or watching Netflix, I have been hearing shouts coming from the street. But the shouts I hear don’t come from my own neighborhood. I know this because when I go to my window to check who is making noise, there is no one on the streets. The noise is traveling several blocks, from the next neighborhood over. During the morning and afternoon, there is no noise. Like literally, I can hear a pin drop that’s how quiet the neighborhood is. I kept expecting some type of music—anything--but it feels like I moved somewhere else. I keep checking to see if I am in the right neighborhood.