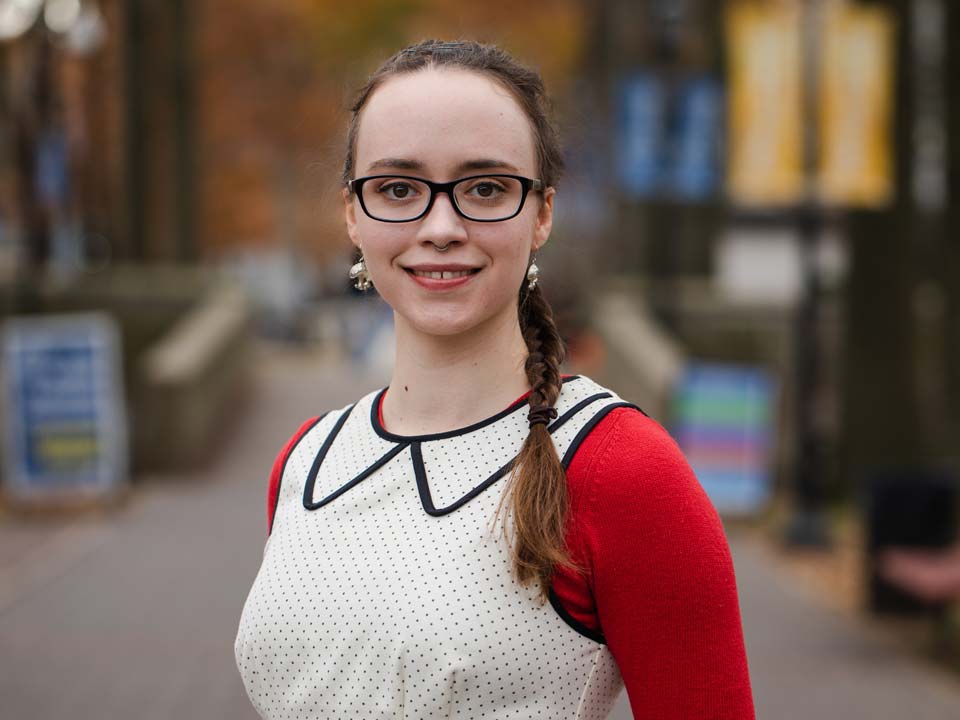 When biology major and Macaulay Honors College junior Olivia Asher ('21) was deciding which college to attend her final year of high school, she had priorities. One of them was to attend a school that was in close proximity to the Bronx's New York Botanical Garden so she could study lichens—the fungal growths that can be found in a rainbow of colors on rocks, walls and trees.

“I'd always been really interested in lichens,” Asher said, “because I would see them growing all over the place, but it was really hard to find information about them. They look very cool, they’re pretty, they’re very unique.”

Lichens are, in fact, not a single organism, but two—a fungus and an algae or cyanobacteria—in a symbiotic relationship. They produce compounds found nowhere else in nature, said Asher, and unlike most organisms, they cannot be cultured in the lab. These unusual properties are some of the reasons why lichens, and their role in ecosystems, are not well understood.

“Very little is known about the symbiosis of the fungus and the bacteria,” she said. “We don’t know what they need to grow, and what they grow on can be very, very specific. We don’t know why that is.”

Lichens, and fungi in general, are little known. Currently, only about 12,000 species of fungi have been identified, with estimates that the kingdom may contain upwards of two million species.

“Barely any fungi are protected internationally, compared to plants and animals,” she said. “A lot of people think that either they’re not endangered at all or else there’s not enough known about them to protect them, which is not true in either case. Part of the work of protecting something is knowing what it is and giving it a name. So that’s one of the reasons I was drawn to it.”

Asher’s field of lichenology falls within the area of mycology (the study of fungi), and the Botanical Garden has leading mycologists on its faculty. Because Asher wanted to know more about lichens, Lehman College— a short, two-mile trip from the 250-acre Botanical Garden— was where she decided she wanted to study them. It turned out to be the right choice: Lehman also has a 50-year academic partnership with the Botanical Garden in plant sciences.

She began working on a volunteer basis at the Garden during her freshman year, assisting James C. Lendemer, staff lichenologist and assistant curator at the Botanical Garden’s Institute of Systematic Botany. Asher’s research there consists of naming lichen species, describing them, and identifying how they’re similar to and different from other species. Her efforts are already making an impact in the field—and paying off.

Just last semester, Lehman’s School of Natural and Social Sciences selected Asher as the Con Edison STEM Scholar for the 2019-2020 academic year. The annual scholarship, established by the energy utility in 2016 at a number of New York City area public institutions, including Lehman, comes with a $5,000 award.

In addition, Asher was lead author on a 2018 paper published in The Bryologist that announced a new lichen species.

“It is rare for most undergrads to have a publication under their name as first author, even rarer when it occurs in a student’s first year of school,” said Lehman biology professor Jack Henning, who introduced Asher to Lendemer.

This past June, Asher traveled to Australia along with another Lehman student to study the continent’s rich diversity of fungi, working under the supervision of Naveed Davoodian, who had been her introductory biology lab professor.

Access to such research experiences, and opportunities to meet fellow mycologists from around the world, are unusual for most undergraduate students. Funding is often an obstacle. Asher said she was able to visit Australia only with the help of two small scholarships she received last year.

“Networking with mycologists in your field and being able to travel to do research is really important, and it can be very, very hard for students to do that… So, I expect that I’ll be able to use [the Con Edison] scholarship to do something similar.”

Haiping Cheng, chair of Lehman’s Department of Biology, praised Asher’s drive to advance knowledge in the fields of mycology and lichenology.

“Our department is really proud of Olivia's accomplishment. She is an inspiration for all of us,” Cheng said. “As a microbiologist, I am especially glad to see Olivia is making contributions to the better understanding of lichens, a common yet difficult to study microbial symbiosis system.”

In addition to the support her Con Edison STEM Scholarship will provide, Asher is pleased to represent among the scholarship recipients a scientific field that is not well known.

“It was really an honor to get this award,” Asher said. “It was really nice to see [my work] recognized, especially for a field like mycology that often doesn’t get a lot of recognition.”