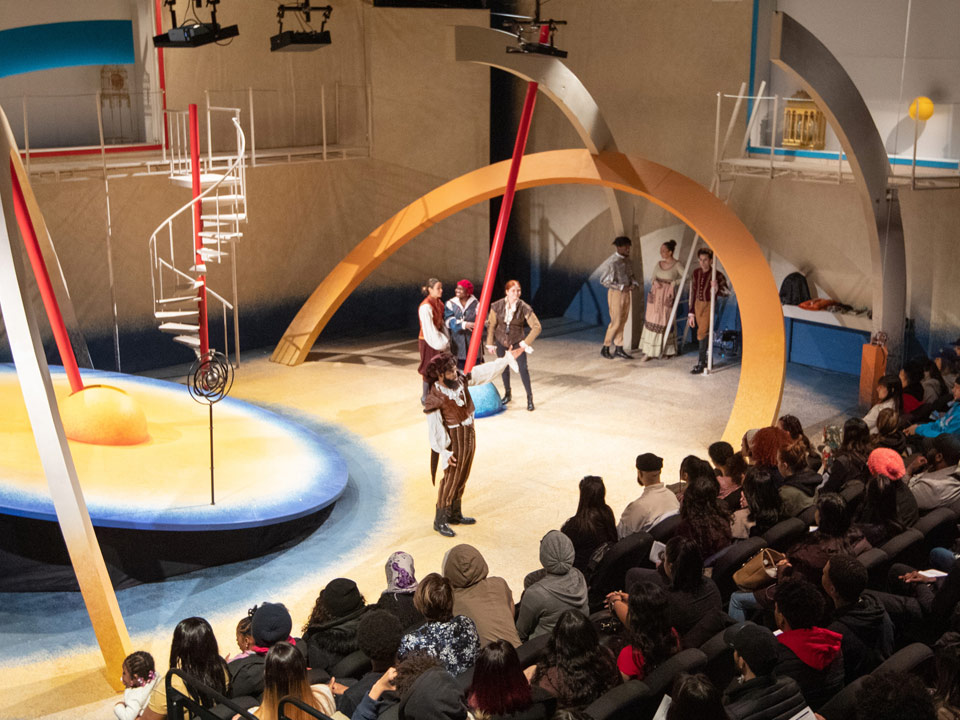 BRONX, N.Y., February 27, 2020–Nine years after 64-year-old European immigrant Maiken Rand died, her wish to donate $100,000 to Lehman College's theatre program–a joyful stage she relished in spite of a lifelong, debilitating illness–has finally been granted. The gift will be used to create a scholarship endowment for graduating seniors as well as well as the purchase of production materials and technical equipment for classrooms.

“The Maiken Rand Endowment will support Lehman graduates in their professional development in the performing arts through apprenticeships and residencies at some of the most prestigious theatre and dance companies across the country,” said Rick DesRochers, associate professor and director of Theatre and Multimedia Performing Arts at Lehman.

But who was the mysterious woman who lived modestly on the third-floor of a six-story Bronxdale tenement just two miles east of the campus? Born Nov. 10, 1947, in Brussels, Belgium, Maikan Rand was the only child of Marga and Walter Rand, both Estonian natives. Her father served in the Estonia military during the Soviet occupation of the country during World War II and later graduated from Tallinn Technical University in 1941, earning his doctorate in engineering from Karlsruhe University of Technology in 1943. He moved to Belgium in 1945, where he met Marga and worked as a design engineer for Brussels construction company, Maurice Delens Enterprise.

In 1951, the family emigrated to Iowa City, where Walter Rand worked as a university researcher. The Rands resettled in the Bronx two years later. Walter Rand, who is credited with the redesign of both the East Barre and Wrightsville dams in Pennsylvania, began his hydraulics and harbor construction teaching career at New York University before joining the faculty in 1951 at what was then Hunter College in the Bronx. He remained on this campus until he retired from, by that time renamed, Lehman College in 1981.

Maiken grew up in the Estonian Evangelical Lutheran Church, listened to traditional folk songs played on the kannel, an Estonia string instrument, read the words of playwright Hugo Raudsepp and enjoyed the Christmas holidays with her cousins feasting on blood sausage and sauerkraut, herring and sour cream, and potatoes and pork, members of her family said.

“Maiken was full of life, cheerful and very attractive,” said her cousin Mai Vomms Jarve, a professional artist and curator. Their grandmothers were sisters; and art was the family business. Another cousin Ants Vomm was a famous Toronto caricaturist.

“She was very attractive, cheerful and she also liked to draw and paint pastels,” Jarve said.

As a child and later as an adult, Maiken would spent time on Lehman's campus visiting her father and attending campus activities, said another Rand cousin, Matti Maricq. “She had a lot of positive experiences with the place.”

“When she was 18, she was attacked in Central Park and was stabbed in the upper leg,” Jarve said. “The mugger fled and Maiken was taken to the hospital. She was never the same after that.”

She was a long-time caregiver to an ailing friend, Jerry M. Miller, and worked numerous odd jobs including as a secretary for an Estonian priest. Her appreciation and love of culture, particularly the classics in music and theater, helped her find balance and joy, her family said.

Upon her death on Feb. 7, 2011, she left financial gifts in her will from an estate of $600,000 to her cousins, the Estonian Evangelical Lutheran Church of New York, the Riverside Mental Health Clinic—and the Lehman College theatre program.

Maricq said his family did not know about Maiken's gift to Lehman in her will but he was not surprised by her generosity. “She found something there that made her feel good,” Maricq said. Rand's gift now creates a legacy, in her name, for others to create and feel good about the arts as well.

“We are profoundly grateful to fulfill the wishes of Maiken Rand who was inspired by our students, both onstage and in the classroom,” DesRochers said; “and whose memory will live on through the exciting stage and screen work of our Lehman College graduates in Multimedia, Performing Arts, and Theatre, now and into the future.”