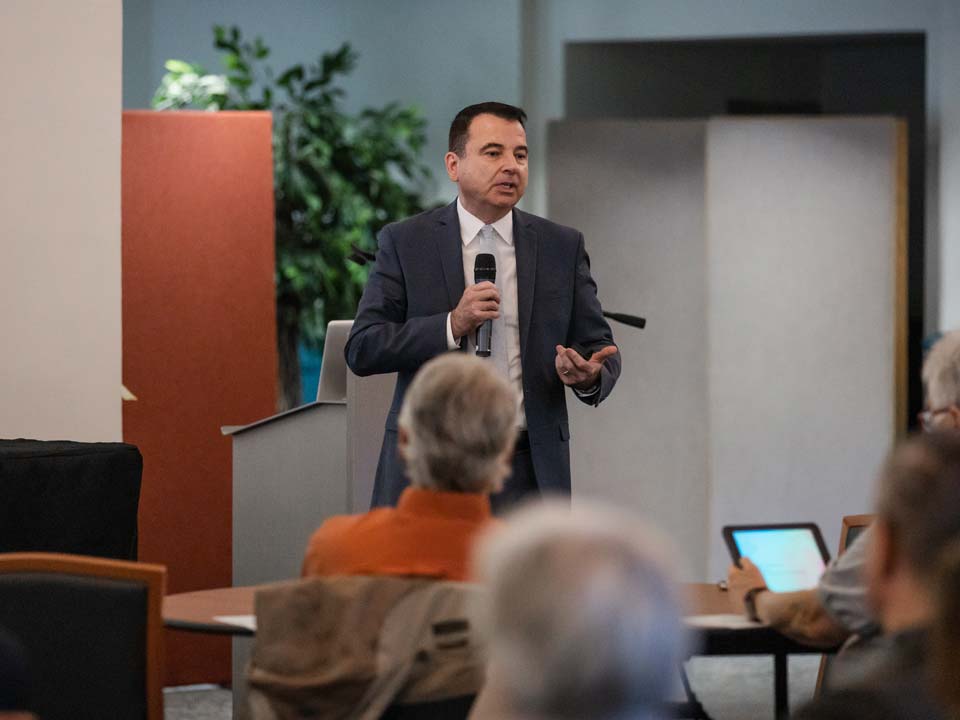 Earlier this month, approximately 135 members of that community gathered in the Music Building's Faculty Dining Room for Lehman's first ever, daylong Student Success Summit that aimed to raise awareness of Lehman's ongoing efforts toward student success; sharing best practices towards that goal; and ensuring student achievement through the effective organization of people, processes, technology, and data.

The event featured panel discussions and presentations, workshops, and keynote speaker Timothy Renick of Georgia State University. Renick is a national leader in the area of student success.

In his opening remarks, Lehman President Daniel Lemons pointed out in this, the third year of the 90x30 challenge, through which the College aims to double the number of degrees and certificates it confers to 90,000 by 2030, Lehman will continue to focus on closing equity gaps for our students.

“Genuine commitment to student success requires an institution-wide focus on improving supports for student persistence, learning, and advancement to the next level of education or in the labor market,” he said.

Innovation, collaboration, and continuity of effort were themes of the day.

Like the president, Nwosu stressed how vital collective effort is to the success of 90x30. For example, seven task forces across the campus have been already been created to ensure a clear flow of information among the many offices and processes that have a direct impact on students.

“By improving students' experiences at Lehman, we will be able to accelerate students success outcomes,” Nwosu said.

Lehman has already instituted web platforms and apps that extend into many areas of student support, impacting student-faculty interactions and streamlining course registration, for example.

However, effective use of data goes beyond charting student progress and academic trends. It also informs decisions and shape the relationship between Lehman students, faculty, and administration. This creates “a community of care,” said Dean of Student Affairs Stanley Bazile, where students feel supported regardless of where they may be on their journey through college.

A Model for Student Success

In his keynote address, Timothy Renick, senior vice president for Student Success and professor of Religious Studies at Georgia State University, championed this student-centered philosophy and the best practices for putting it into action across an institution.

A decade ago, Georgia State, a public institution in downtown Atlanta, was losing a significant number of students at every stage of the college trajectory, Renick said, from enrollment to declaring a major to graduation.

For instance, nearly 20% of accepted students never matriculated. Many students changed majors more than once, lengthening their time to degree and increasing their chances of dropping out, he said. A sizeable number of seniors didn't graduate because their tuition and fee balances were in arrears.

The remedy, Renick said, required a shift in perspective. Rather than focusing on students' problems in isolation, faculty and administrators began looking for structural problems within the institution that were creating stumbling blocks, and zeroing in on the type of students who were struggling.

The creative solutions for increasing enrollment, retention, and graduation involved using data more strategically and developing systems to improve communication and the flow of information between Georgia State's offices, faculty, and students.

On the academic front, the university established freshman learning communities, promoted innovative teaching, and supported new course design. It also provided small grants to seniors who owed the institution an average of $900, so they could graduate.

These simple but profound changes had a major impact on student behavior, said Renick. Among the improvements, he said, student retention increased to nearly 90%, their time to degree declined, and 80% of seniors who received help with account balances graduated within two semesters.

The result, said Renick, was that this year's graduating class was 73% larger than that of 2011.

“The students who benefited most were the students who needed the help the most, equity-wise,” said Renick. “Race, ethnicity and income were no longer predictive of academic success.”

After the keynote, Bazile reiterated the importance of similar measures at Lehman—especially collaborations between divisions and offices—for students' welfare.

“If we're talking about student success, we need to do it together,” he said.

Partnerships with other institutions are also improving student success. The Bronx Transfer Affinity Group (BTAG), for example, is an initiative to create a more seamless transition for the 75% of Lehman students who transfer to Lehman from several CUNY community colleges. Within two years of BTAG's creation, Lehman's enrollment has increased, and nearly 15,500 students are attending the college this fall.

“It's not just about the numbers,” said Vice President for Student Success and Associate Provost Reine Sarmiento, stressing the value of college partnerships. “It's the relationships we build across the college and the community colleges that make Lehman such a special place.”