Making Sure the Bronx Counts: Lehman Holds Forum on 2020 Census 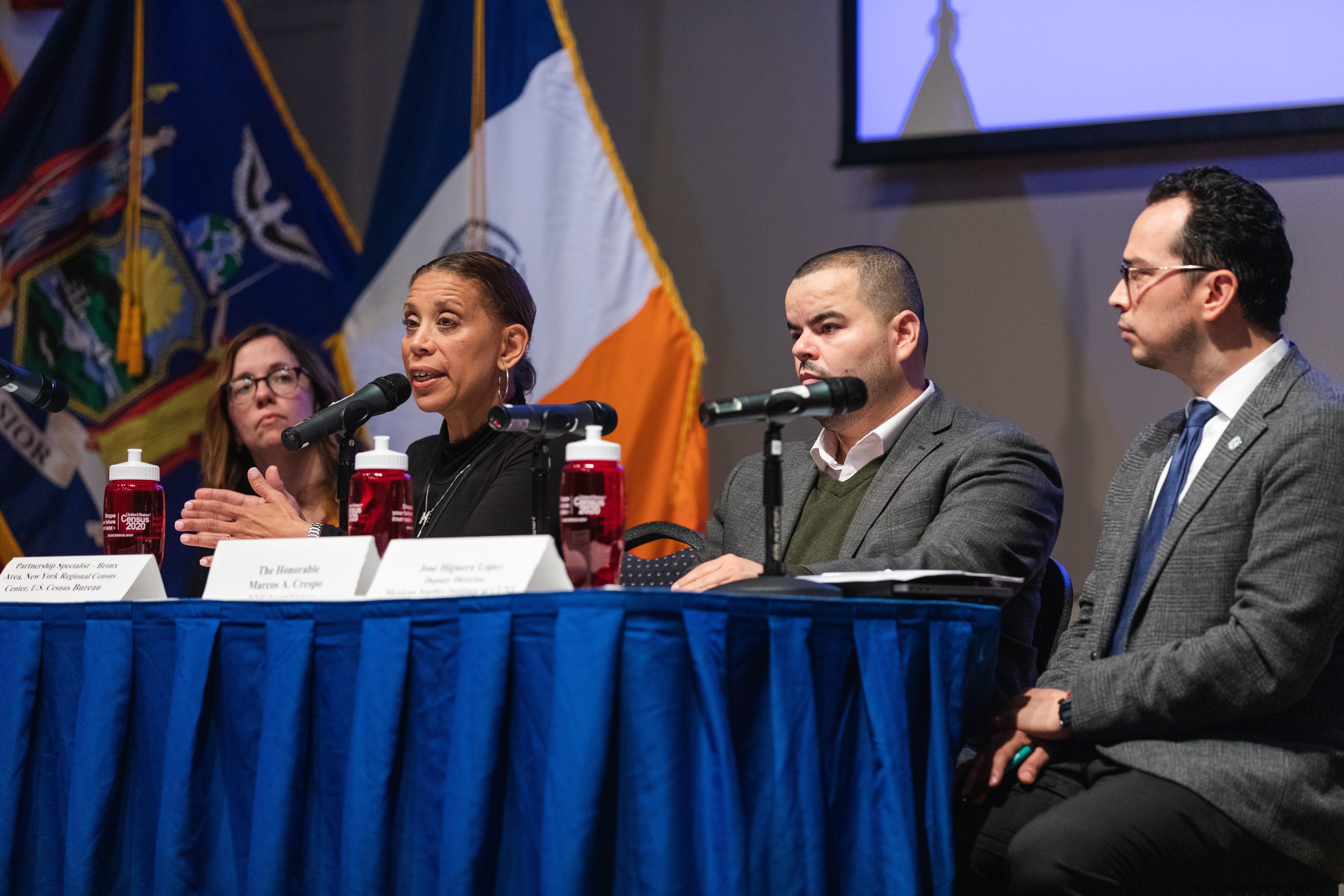 Photo of participants in the "Make the Bronx Count" panel.

With the 2020 census less than five months away, Lehman College is doing its part to educate students and community members about historic changes to the survey—and why an accurate count matters more than ever—through its “Make the Bronx Count” initiative.

The effort aims to boost the number of Bronx residents who participate in the census while also making sure the campus community is aware of the importance of participating in the decennial national population count.

Lehman kicked off “Make the Bronx Count” on Oct. 30 in the Music Building’s Recital Hall with the panel discussion, “Making Sense of the Census.” As the first of a series of free community events, the forum delved into how the census works, why an accurate count is essential to getting appropriate federal funding for local resources, and how the survey will be used to determine the city’s representation in state and federal government for the next decade.

“Undercounting is a pervasive problem in New York City,” Lehman President Daniel Lemons said in his welcoming remarks. “It is the families and communities who have been historically hard to count who stand to benefit the most from an accurate and complete count in census 2020—federal resources and congressional representation to fight for the funding of public education is at stake.”

Still, Lemons added, students, staff, and faculty have enormous reach with family, friends, and the community that can make a difference. “We will have a major impact if we take advantage of that,” he said.

Crespo, Matos, and Higuera López all pointed out that the amount of federal money allocated for safety net programs, such as SNAP, children’s health insurance, and afterschool programs—as well as housing and city infrastructure—is based on census numbers. Indeed, if the 2020 count is accurate, Crespo said, New York State stands to receive $675 billion per year, distributed over the next 10 years.

On the other hand, Laird said, when communities are undercounted and lose potential funding, the impact can last for a decade or more. And, the impact is more than economic. Census counts also determine how much of a voice people have in government, she said.

“Seats in the House of Representatives in Congress are allocated to states based on the distribution of population,” said Laird.

Still, some people don’t understand or are afraid to participate in the census, uncertain how the information they provide will be used, Matos said. That’s why the census needs representatives who have credibility within their communities and can communicate with non-English speakers, including speakers of indigenous languages.

Higuera López said the Mexican Institute is planning to do just that, partnering with BronxNet to create 2020 census public service announcements in several Mexican indigenous languages, including Mixteco, Zapoteco and Nahuati.

And, for those in the audience who were unsure, Matos reiterated that the citizenship question proposed by the Trump administration—and blocked by the Supreme Court in June—is not included on the 2020 census form.

“The citizenship question is no longer an issue,” said Matos. “We are not going to ask that question. It’s not relevant to this 2020 census.” Instead, Matos added, “we would like to focus on the importance of every single living person in the United States and territories…to answer the census. We just want you to be counted.”

To help achieve an accurate count, the U.S. Census Bureau is hiring 84,000 census workers in New York City to ensure that their neighbors are counted.  In the Bronx alone, 14,000 jobs will be available. Moreover, unlike previous years, working for the 2020 census will only require legal residency and not U.S. citizenship. Matos said that people can also help ensure an accurate count in other ways, like, for example, serving as a local source of information for neighbors and friends.

As another first, the 2020 census will include an option for completing the survey online. This may appeal to people who don’t want a census taker knocking on their door, although Crespo, who represents the Soundview neighborhood in the South Bronx, pointed out that a reliance on technology can create obstacles in under-resourced areas.

“In the Bronx there is still a digital divide,” he said. “We have to find resources to make that access available in our community.”

Crespo is working with local libraries to dedicate computer and staff resources to the census so that people can go there to complete the survey online and get assistance if necessary.

The next Make the Bronx Count event, Fact Check: The Census in the Age of Trump, is planned for Dec. 9 at 6 p.m. in the Studio Theater and will feature a frank discussion with civil rights advocates and activists on the Supreme Court’s citizenship question, digital security, and misinformation campaigns surrounding the 2020 census.