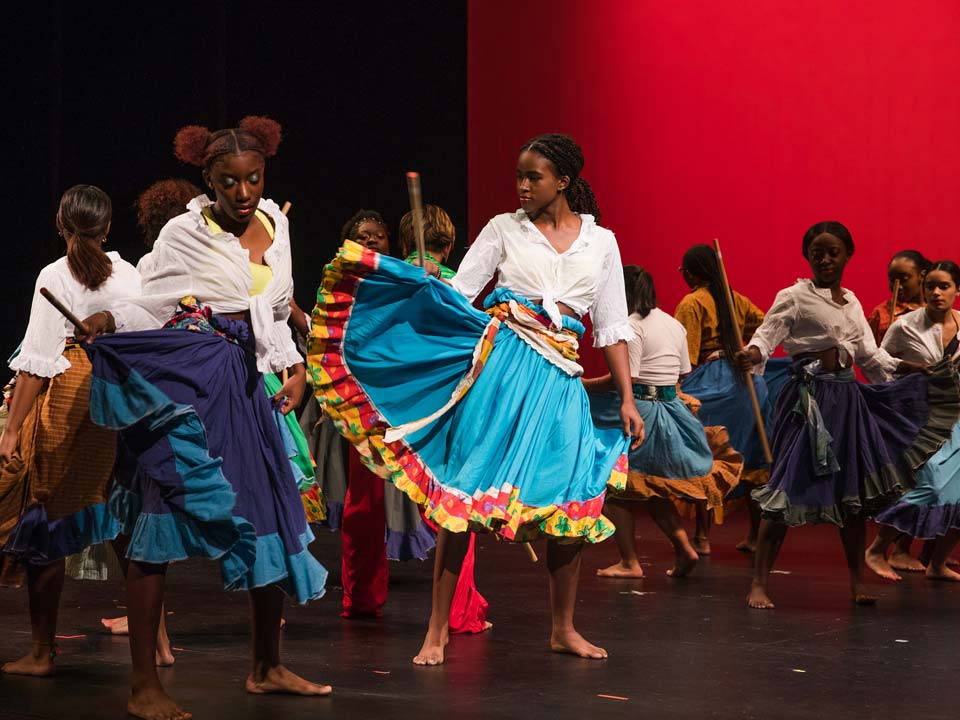 The annual College NOW Summer Multimedia Arts Festival at Lehman, now in its 17th year, was presented at the Lovinger Theatre for two days in August, and showed how cultural arts education programs can be a great way for high school students to spend five weeks while earning college credits.

The College Now program at Lehman is part of a partnership between the New York City Department of Education and The City University of New York that offers free pre-college preparation, college credit course, and summer programs for high school students.

At this year’s College Now summer arts academy, over 90 students, mostly from public high schools in the Bronx, studied modern dance, journalism, digital imaging, animation, multimedia arts production, playwriting and acting in intensive, daylong classes. The festival was a culmination of their efforts.

“This program is great because it offers a number of unique experiences and opportunities that I don’t get in school,” said Jason Smith, who took the journalism class last summer and returned this year for the Digital Storytelling course.

At a rehearsal for the four plays, thematically grouped together and titled “Blackout,” class instructor Stephanie Stowe (a playwright, actor and adjunct lecturer at Lehman), alternated praise with admonitions for “more volume and clarity” from the student actors.

And at rehearsals for the dance routines, the mantra was, “Do it perfectly.” Two of the dances were choreographed by instructor Michael Manswell, an adjunct professor in Lehman’s Department of Music, Multimedia, Theatre & Dance, and the other by teaching assistant Amanda Almeida, who is majoring in dance and anthropology at Lehman.

“I stand in awe of our students this summer and congratulate them for the compelling works they produced,” said David Gantz, director of Lehman’s College NOW program. “Thanks to support from the college’s deans and department chairs, as well as all of our faculty members, the summer arts academy students were given an opportunity to showcase their talents—which they certainly did.”

At the festival, Shanik Vasquez, a teaching assistant in the journalism class and part-time staffer in the College NOW program, recalled spending three summers in the summer arts academy classes before matriculating at Lehman, where she earned a bachelor’s degree two years ago in Media Communications Studies with a minor in Japanese.

“As a student, the transition from high school is not always that easy,” said Vasquez, who grew up in the Bronx. “College NOW helped prepare for me what I was going to be facing in college while also letting me explore different areas in the cultural arts. Now, as a [teachers assistant], I love seeing the students succeed, produce their work, and be really involved in it.”