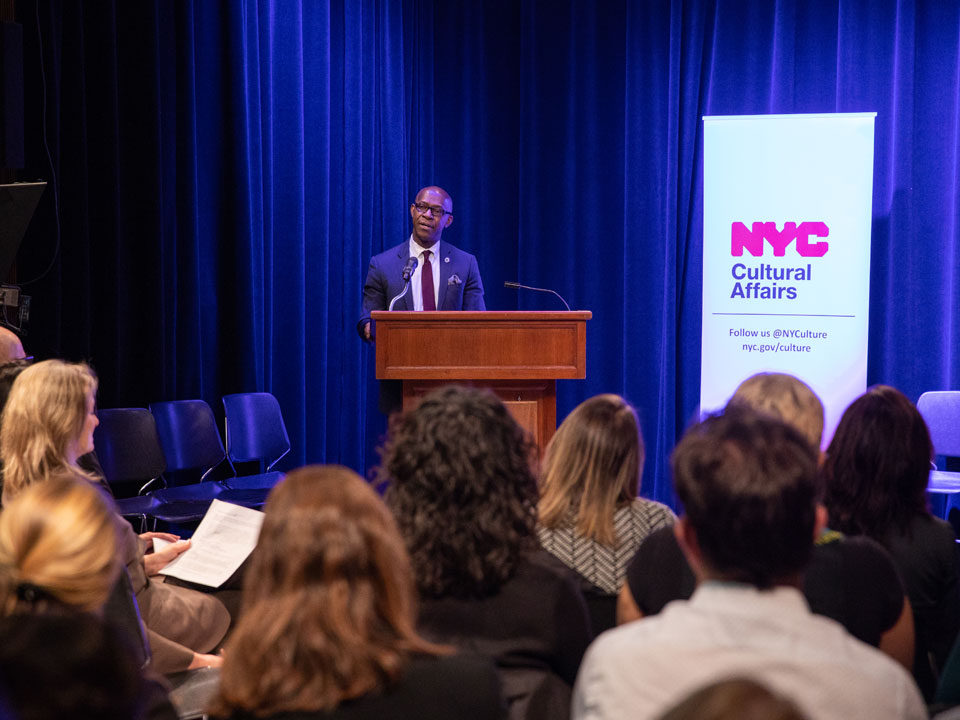 Lehman College is one of three new host sites for a collaboration between the Mayor’s Office of Media and Entertainment and PEN America called DREAMing Out Loud, a program designed to develop new talent for the publishing industry by offering tuition-free writing workshops for undocumented immigrants.

NYC Cultural Affairs Commissioner Tom Finkelpearl made the announcement at an event hosted at Lehman, where he announced the 10 recipients of the Mayor’s Grant for Cultural Impact.

Lehman College Interim Provost Peter O. Nwosu said, “The news that PEN America, an organization that celebrates the free expression of individuals around the world, and the Mayor’s Office of Media and Entertainment are setting up writing workshops for Dreamers stands as a truly shining example of a public-private collaboration that will generate much-needed support for many of our friends and neighbors.”

Acting Commissioner for the Mayor’s Office of Media and Entertainment Anne del Castillo and PEN America President Jennifer Egan outlined the expansion of the DREAMing Out Loud program, which also includes new sites at Flushing at Queens College and Central Brooklyn at Medgar Evers College.

“PEN America stands at the intersection of literature and free expression to celebrate the power of writing to change the world,” said Egan. “One of our most dynamic programs giving life to this mission is Dreaming Out Loud. The program began in 2016 with CUNY and novelist Alvaro Enrigue to establish opportunities for young adults with undocumented citizenship through creative writing, to provide access to career development, and to spark important public conversations to counter stereotypes and humanize media reports about immigrants. We extend our deepest thanks to Mayor de Blasio, the Department of Cultural Affairs, the Mayor’s Office on Media and Entertainment, CUNY, Alvaro, the aspiring young writers in the program, and to our newest workshop leaders, authors Lisa Ko and Charlie Vazquez.”

The event was one of several held as part of City Hall in Your Borough, held the week of Jan. 28-31 in the Bronx. Representatives from the Mayor’s office also toured the Tech Center at Lehman’s CUNY on the Concourse and attended the first day of classes at the College.