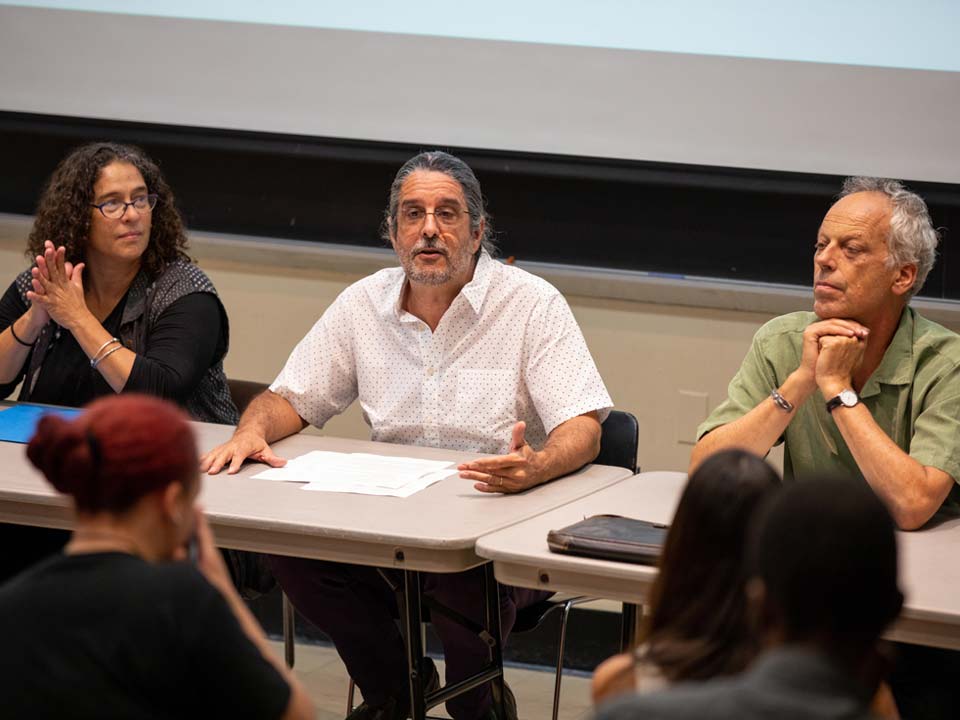 This year marks 50 years since students and faculty at The City University of New York (CUNY) colleges began pressing their administrations to establish courses of study in Latin American and African American history and culture. To celebrate this anniversary, Lehman's Latinx Alliance hosted, “CUNY Latinx at 50: Celebrate and Reflect on 50 Years of Latinx Studies at CUNY,” a panel discussion that detailed the genesis of the Latin American, Latino, and Puerto Rican Studies and Africana Studies departments—and the students who helped make it all happen.

“As a community-focused institution, we have to remember our history of activism and engagement in order to make the changes that we need to sustain our vision and mission,” said Teresita Levy, chair of the Department of Latino, Latin American, and Puerto Rican Studies. “Students have a voice in this institution, and it is a voice that comes with real power to effect change.”

Along with Levy, three other members of the department participated on the panel: Professor Forrest Colburn, lecturer Magdalena Sagardia, and Xavier Totti, a lecturer and editor of the award-winning academic journal CENTRO: Journal of the Center for Puerto Rican Studies. Totti is also editor-in-chief of the eMagazine Centro Voices.

Lehman has a strong history of student activism, Totti said, adding that it was Lehman students who pioneered the creation of what was then known as “ethnic studies” at CUNY and other institutions on the East Coast.

Totti provided a brief chronicle of student activism at Lehman, beginning in 1968, near the end of a tumultuous decade that saw protest, anti-war, free speech, and civil rights activism across the country. A powerful student movement throughout CUNY also arose, demanding an open admissions policy. With guaranteed admissions for all New York City students, more people of color—in particular, African American and Puerto Rican students— enrolled. This quickly changed the demographics of CUNY student body.

Before 1969, Totti said, few if any institutions in the nation offered courses of study in Latinx or African American history and culture. CUNY was no different. On the West Coast, student activists at a handful of institutions had successfully lobbied for the creation of specialized areas of study. CUNY students began demanding a similar expansion of the curriculum, as well as the hiring of more minority faculty.

Students wanted their experiences to be reflected in the classroom. It gave them a sense of belonging, said Totti.

“Their stories of migration, their literature and artistic creations, the peculiarities of history and culture matter, and are worth studying. The minority students were not the 'people without history,'” Totti said.

“One must remember that Lehman was a new institution, just a year of having separated from Hunter College,” said Totti. “As a new institution, these departments helped solidify its identity. Credit for this must be given to Lehman's first president, Leonard Lief. He saw that the creation of these two ethnic studies programs would help anchor Lehman's identity.”

Those who attended the panel walked away with a newfound appreciation of Lehman's history—especially the power students have to make a difference, Levy said.

“We have this amazing history and it was wonderful to be able to share it with our students,” Levy said. “They were hanging on to every word, and you could see the pride [in their] their faces as they realized students, just like us, did this. It was inspiring to hear what students did back in 1968, and we are facing political, economic and social struggles that require our activism once again.”

In keeping with the intertwined histories and evolving identities of Latinx and Africana studies at Lehman for over 50 years, subsequent events in October and Nov. included roster of events for Hispanic Heritage Month, a talk by writer and activist Raquel Almeida, “Black Families in Brazil: Then and Now”; and a screening of “Toni Morrison: The Pieces I Am,” a documentary exploring the life and work of the late Nobel laureate.