Lehman Confers a Record Number of Degrees at 2019 Commencement 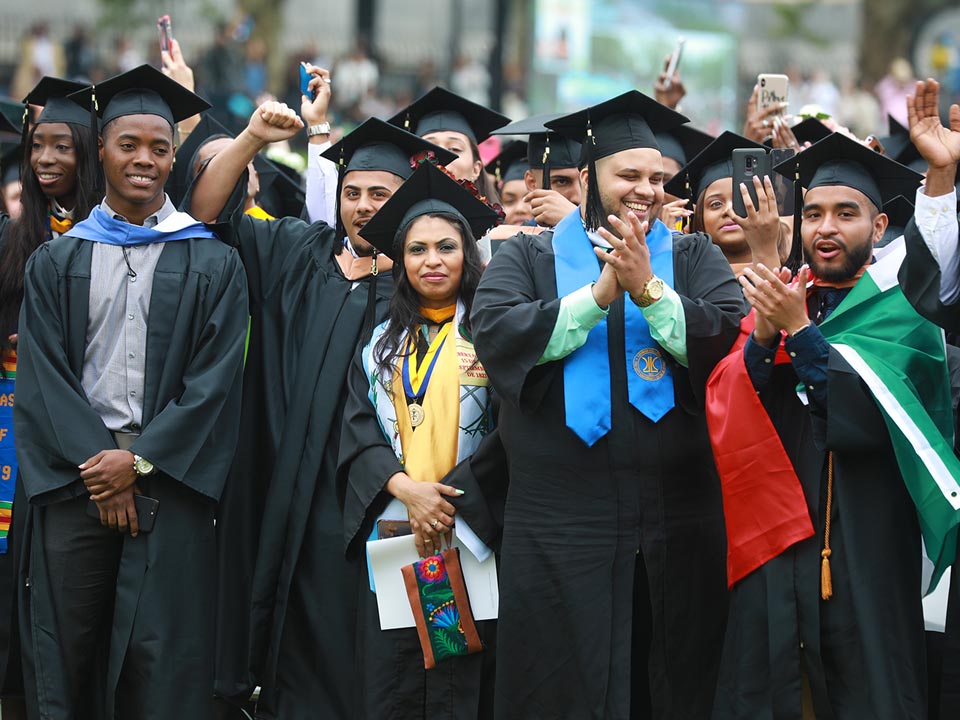 Lehman Confers a Record Number of Degrees at 2019 Commencement

The skies may have been gray, but the atmosphere was pure excitement during Lehman College's 51st commencement ceremony.

The ceremony featured an emotional address from Lehman College President José Luis Cruz, who was officiating his third and final commencement at the college after being named CUNY executive vice chancellor and university provost.

"I learned early on and have since confirmed, that what our campus community admires most about Lehman College is the sense of engagement that exists among students, faculty, and staff; the sense of connectedness that links the College to the people and places in the community it serves; and the sense of purpose that sustains the most beautiful campus of The City University of New York," said Cruz.

The Graduate Address was delivered by Lourdes Bravo, who resumed her college education through Lehman’s Adult Degree program at the same she was pregnant with her now two-year-old daughter.

"We cannot be certain of what we will be faced with in the future, but please don’t be scared to recalculate and recalculate again," said Bravo in her remarks, referencing an academic journey that included stops at five other colleges.

Mildred García, president of the American Association of State Colleges and Universities, delivered the commencement address and also received an honorary Doctor of Humane Letters. Born and raised in Brooklyn and an alumna of Baruch College, García is a first-generation college graduate, like many of the Lehman students she addressed.

During her speech García stated, "The one solution to poverty and violence is higher education."

She encouraged the Class of 2019 to be role models in their communities, continue learning, and work to make a difference.

A recipient of a MacArthur Fellowship in 2007, Lovell is renowned for depicting the lives of African-Americans in portraits and installations. His works are held in collections across the country, including the Smithsonian American Art Museum, the Whitney Museum of American Art, and Pennsylvania Academy of the Fine Arts.

Seidenberg rose from cable splicer at New York Telephone to become CEO at Verizon, where he oversaw the corporation’s nationwide wireless network and global expansion. A decorated Vietnam veteran from a working-class Bronx family, he attended Lehman part-time and at night, majoring in mathematics. Today, he serves on the board of trustees at New York-Presbyterian Hospital.

Associate Professor David Hyman from Lehman's Department of English, named Teacher of the Year, was the presiding master of ceremonies. The Adjunct of the Year Award was given to Associate Professor Richard Birrittella from the Department of Physics and Astronomy. Michael W. Yackira '72, former chief executive officer of NV Energy, was awarded the 2019 Alumni Achievement Award.

After the commencement ceremony, there was a luncheon for the graduates and guests, who mingled and strolled around the 37-acre campus while the Lehman College and Community Jazz Ensemble performed.

Congratulations to all 3,676 Lehman College graduates and their families!