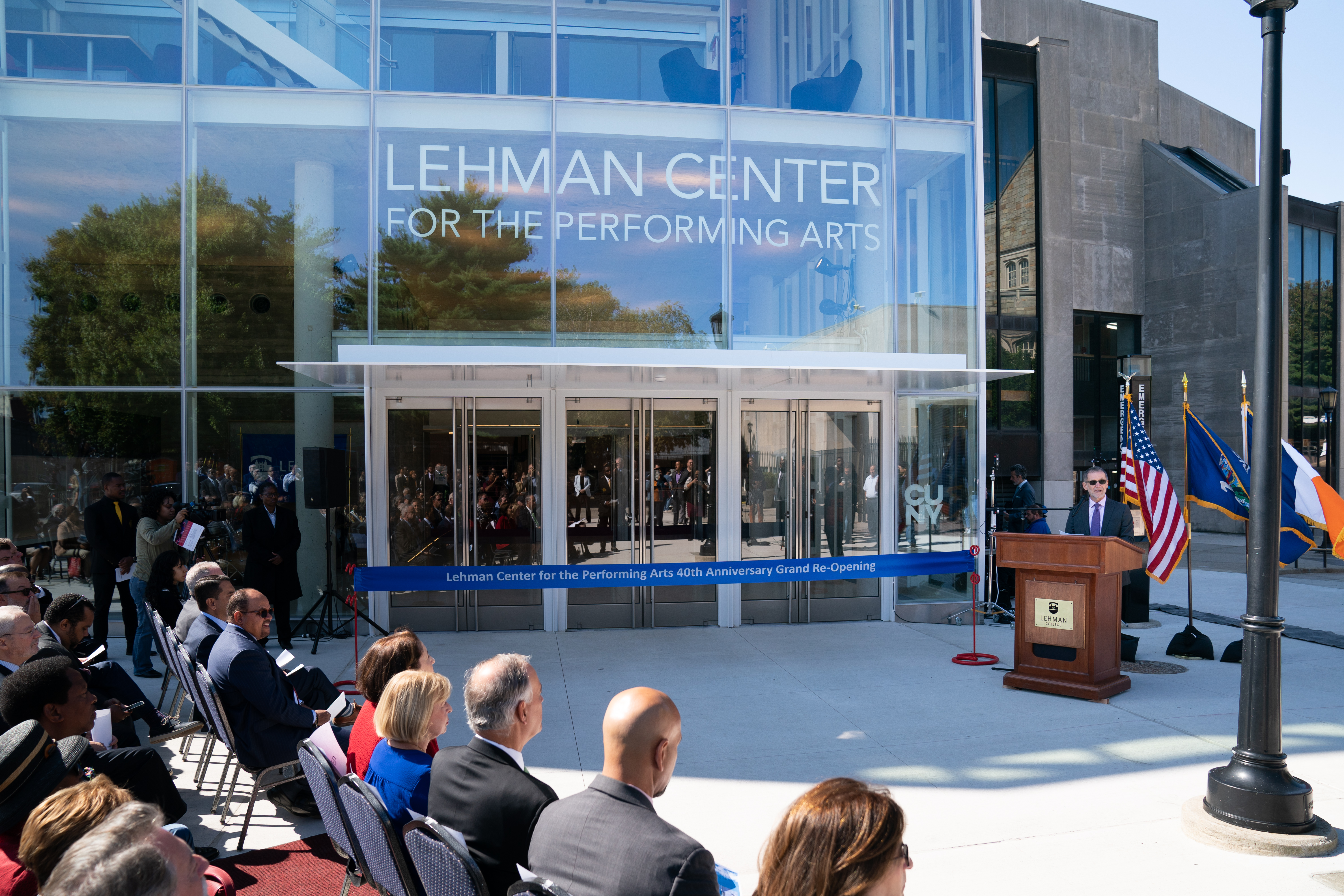 The Lehman Center for the Performing Arts celebrated the completion of its $15.4 million renovation project with a ribbon cutting ceremony on Sept. 19, just days from the start of its 40th season as the premier entertainment venue in the Bronx.

"The re-opening of the renovated Performing Arts Center in its 40th anniversary year is special for a number of reasons," said Lehman College President Daniel Lemons. "It demonstrates our commitment to remaining one of the premier large cultural centers in the Bronx –one that showcases the arts arising from this vibrant borough – during a time of significant renewal."

The major refurbishment project, which began in November 2017 and took less than two years to complete, includes 5,595 square feet of enlarged space for the Lehman Center, including a new, visually impressive glass-enclosed main entrance and lobby. There is also brand-new theater seating, new walkway ramps (making the venue now entirely ADA compliant), a redesigned box office, an elevator to the balcony, event space and additional restrooms.

The first phase of the Lehman Center's renovation focused on upgrading the lobby and took place last fall. The more recently completed work occurred in the Concert Hall, where new seating and carpeted aisles were installed, the floors entirely refinished, and in the administrative offices.

With 2,276 seats, the Lehman Center for the Performing Arts is the largest entertainment venue in the Bronx. It opened its doors in 1980 with a mission to provide borough residents and others with access to affordable, culturally diverse performances. Operating as a separately-incorporated non-profit organization, the Lehman Center serves over 200,000 audience members annually during its September through June season, and also hosts numerous area high school graduations and community events.

"You don't have to travel to Manhattan to enjoy performing arts. You can stay right here in your neighborhood and experience the creative vision of one of the city's great 21st century cultural landmarks," Rodríguez said. "All of this is to say this performance space is a physical embodiment of CUNY's ongoing mission to produce vibrant cultural and intellectual experiences and to serve the city as an indispensable hub of artistic and creative endeavor, not only for the students but also for the residents for surrounding communities that we serve. The Lehman Center is both a cultural treasure and a community cornerstone; a destination for new neighbors, New Yorkers and tourists enriching the city in so many ways."

"The state-of-the-art expansion of the Lehman Center for the Performing Arts ensures that the Bronx remains a prime destination for both established talent and emerging artists to perform," said Bronx Borough President Ruben Diaz Jr. "Lehman College is one of the crown jewels of our borough, it's a place where Bronxites can find high quality public education and world class live music. As a Lehman graduate myself, I am proud to have contributed funding to these upgrades and to watch this institution thrive."

"During this milestone year, the Lehman Center proudly welcomes audiences and community members to the top entertainment destination in the Bronx, which is now better than ever," said Eva Bornstein, executive director of the Lehman Center for the Performing Arts since 2005.