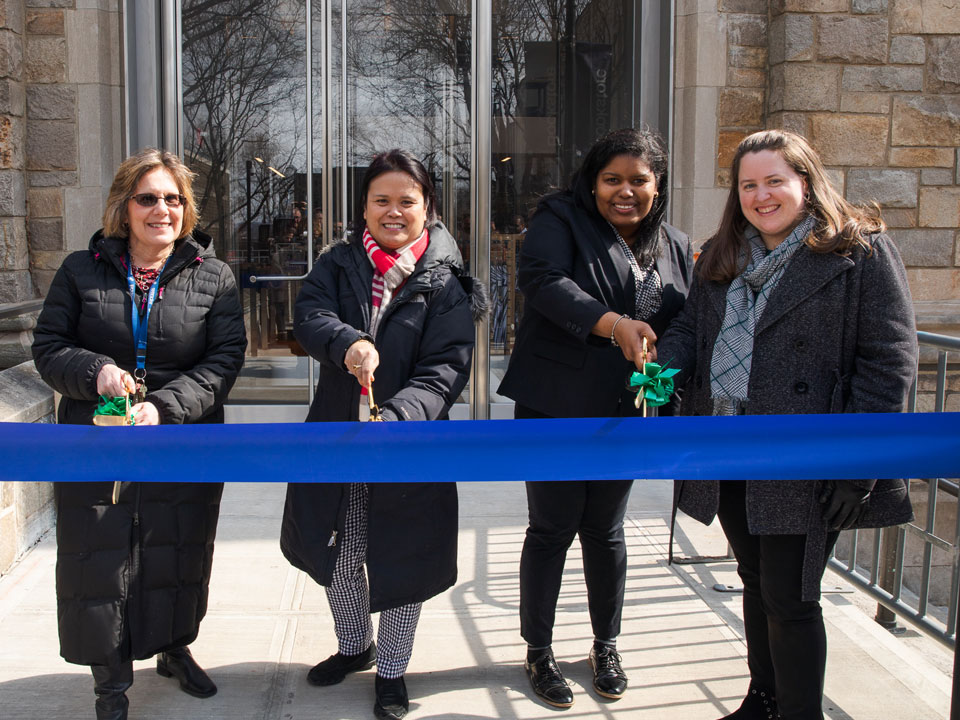 Lehman College officially opened the doors of its new bookstore in the Old Gymnasium Building during a ribbon cutting ceremony held on March 7 and attended by Lehman officials and students, along with executives from Follett, the company that operates the bookstore.

The bookstore’s move is one part of a strategy to grow Lehman’s educational experience by expanding facilities on campus. In place of the one-story temporary building occupied by the bookstore for over 25 years, the College plans to construct a new Nursing Education, Research, and Practice Center. Construction on the new building will begin in the near future with the now-empty former bookstore building slated for demolition later this year.

The bookstore’s new home is located almost opposite its old location across College Walk, the main pathway on campus. The new tall chrome and glass entry faces west, with the bookstore occupying what was once Room 102 in the Old Gym Building. Another doorway opens into the bookstore from inside the Old Gym.

The ground floor holds nearly 2,400-square-feet of sales space, and is where the customary textbooks, Lehman College apparel and gear, stationery items, and snacks are found. A smaller mezzanine overlooking the ground floor, reachable by both stairs and elevator, accommodates office space.

Renovations on the new bookstore location began in the fall of 2018, with care taken to preserve the original maple flooring, glazed wall blocks, and shaped windows of the building, a historic edifice where the first American meetings of the United Nations Security Council were held in 1946.

For more information about the bookstore, visit: http://www.lehman-shop.com.