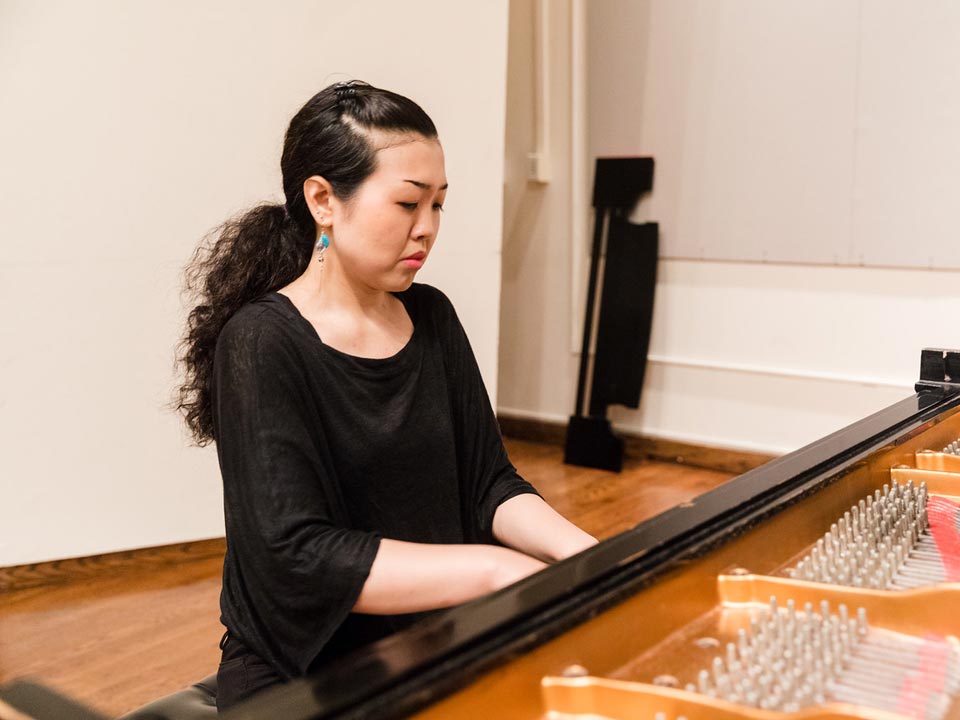 In June, Suehiro performed the new composition, "Concerto for Piano and Ensemble," by composer Martin Loridan and accompanied by the the 23-member ensemble Mise-En, at the sixth annual Mise-En Music Festival, a four-day event in New York City that spotlights cutting-edge contemporary classical music.

"Of course, I was a little nervous about the performance and couldn’t sleep the night before," said Suehiro. "But I'm pretty serious about preparing for concerts. On days when I was teaching I would practice in the morning, and when I wasn't teaching I practiced all day."

Over the past several years, Suehiro has been an active proponent of contemporary classical music, having premiered, she estimated, more than 100 solo, chamber, and ensemble works. Her piano artistry includes a welcome approach to new and extended techniques of playing, which often involve utilizing the instrument in non-traditional ways outside of striking the keys to play different notes, such as manipulating the strings and hammers inside the piano.

A good example of extended technique is Suehiro's performance of another Loridan composition, "Cinq Figures Errantes," which she premiered in 2017. While some chords and notes are played, a good deal of the composed sound is produced through the "guiro technique"—grating the fingernails grating across the surface of the piano keys—or tapping the piano body. Both Suehiro and Ensemble Mise-En were called on to use extended techniques for Loridan's new "Concerto."

"My piano works, including the concerto, combine different types of techniques that call for a new form of virtuosity that mixes percussive effects, resonance, complex melodic lines, and dense textures," said Loridan in an email. "For a performer, one of the challenges is finding the dialogue between those different, yet connected, elements. Yumi naturally 'feels' how these participate in the structure and create a specific sound world; she instinctively creates the connection between them."

The chief reason Suehiro may succeeds on all types of piano techniques, Loridan asserted, was because of her background as a percussionist. Born in Osaka, Japan, Suehiro started on piano at age 6 and the marimba a year later. She excelled on the latter instrument and won numerous competitions throughout Japan.

Suehiro, who just turned 34, only has an upright piano in her Washington Heights apartment. When it comes time to start serious practice for another concert performance or compositional premiere, she returns to Lehman, to the office of music professor Diana Mittler Battipaglia, who has a big grand piano in her office on which she lets Suehiro play.

"And also a couch to nap on," Suehiro said.