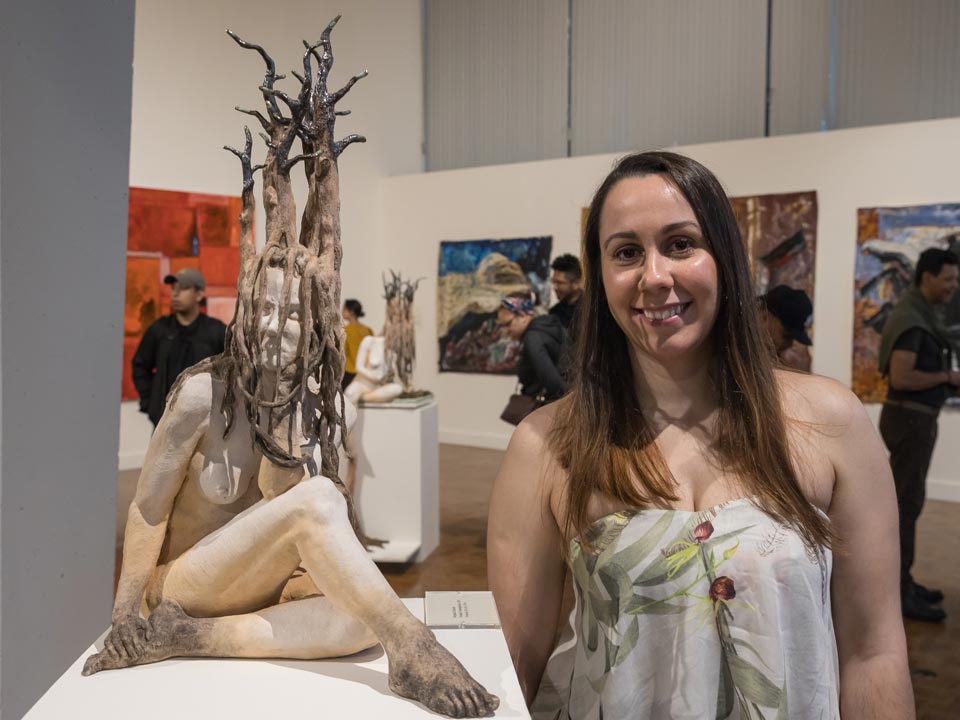 Exactly one week after receiving her Bachelor of Fine Arts degree in ceramics and sculpture at Lehman College's 2019 Commencement, the 31-year-old São Paulo, Brazil native was greeting guests in the gallery of Manhattan’s venerable National Arts Club at the opening reception for her first solo art exhibition.

Showcasing eight different sculptures, all mounted on pedestals and measuring between a foot-and-a-half and four feet in size, Donadio's exhibition emphasizes a strangely unique artistic vision in which human forms are intertwined by tree roots or bursting with tree tops.

"At the end of this chapter in my life it was truly exhilarating to show my husband, family and friends, all who have believed and supported me unconditionally through this journey, that their encouragement was the motivation behind my hard work," said Donadio. "Completing a year-long thesis project, graduating with honors, and then a debut at The National Arts Club—what an incredible validation of my work and proof that those long hours in the studio were well worth it."

Donadio's exhibition, which runs from June 3 through June 28, was the result of winning first prize in the Fifth Annual National Arts Club Will Barnet Student Show, a high-level competition open to students representing nine different colleges and universities around New York City.

Working with clay to create her ceramic sculptures, Donadio won the Will Barnet prize with a poignant political work titled "Dynamics of Power" that depicts a brainwashed citizenry chained to a cartoonish missile. With funding from the Barnet prize she attended a 2018 summer study abroad program in Spain and Italy, led by Lehman art professor John Belardo.

In Florence, the serpentine poses and intricate twists of the human forms in the Renaissance sculptures she saw in the museums inspired her anew, Donadio said. Coupled with her concerns about climate change and human alienation from nature, she began to develop the artistic vision that informs her work in the exhibition.

Five of Donadio's sculptures from the exhibition at the National Arts Club were shown as part of the Lehman College Art Department 2019 Annual Thesis Exhibition at the end of May.

The first in her family to attend college, Donadio first studied graphic design before receiving a technician degree in office automation and secretarial work from Faculdade de Tecnology de São Paulo. Her desire to work as an artist conflicted with a job she had landed at a bank, so she moved to U.S. in 2010 to work as an au pair and study art. In time, Donadio met her future husband Rene Ocampo in a jiu jitsu class. She began her studies at Lehman in January 2016.

Initially a painting student at Lehman, Donadio took a ceramics class at the suggestion of Janet Skolnik, a lecturer in the Art department, and immediately changed her major. At Lehman, Donadio worked in her own studio space, carefully creating the meticulous arboreal and human forms for her works seven days a week. She also had a work study position in the ceramics shop.

"No matter what time of day it was, when I went into the studio, Regi was there working," said Jonathan Lubi, another art student. "She has unparalleled dedication to her art."

In May, Donadio was recognized for Outstanding Achievement at the Honors Convocation for being one of 12 graduating students to maintain a perfect 4.0 grade average through the course of undergraduate study.

Donadio still makes a daily trip from home in the Bronx to her studio at Lehman, although a new student will be taking over its occupancy later this summer. In September, Donadio will begin graduate study at the New York Academy of Art.

"I’m very excited and ready for the challenges ahead," said Donadio. "Everything is coming together for me at the right time, and I'm so grateful that Lehman gave me the opportunity, knowledge, and support to nurture my art."