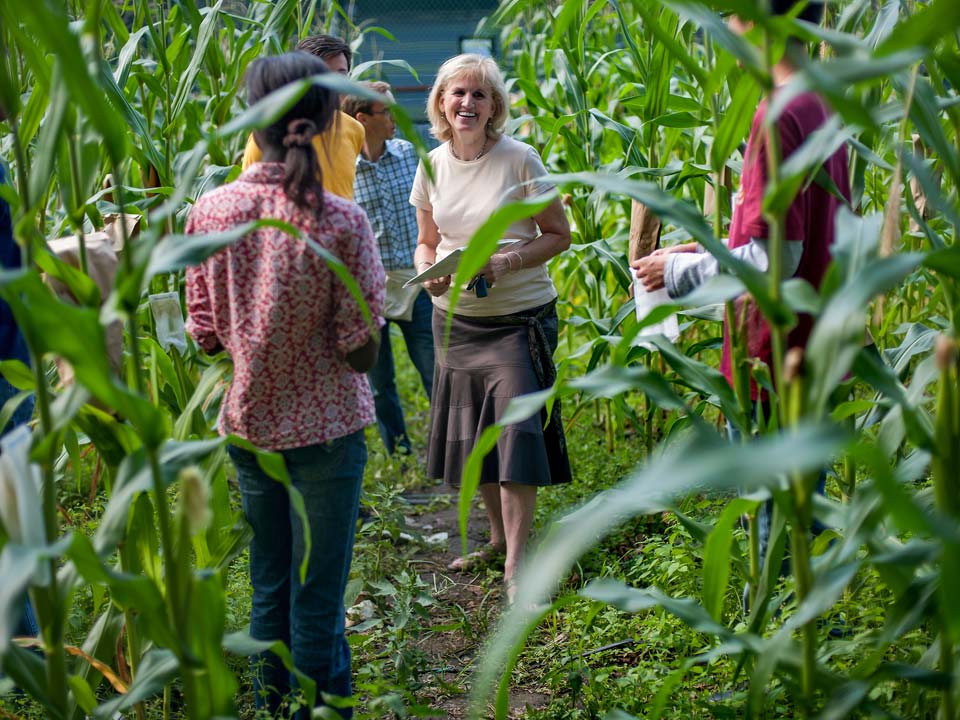 In the 1950s and 1960s, advances in agriculture initiated what is called the Green Revolution, and increased food production worldwide. Now, leading scientists in the emerging field of SynBio, or synthetic biology, are imagining "smart plants" and other technology-assisted agricultural advances that have the potential to usher in a second Green Revolution.

Lehman College Professor of Plant Sciences Eleanore Wurtzel is lead author of a Nov. 18, 2019 article in Nature Plants, entitled "Revolutionizing agriculture with synthetic biology," that introduces biological innovations that could transform agriculture, pharmaceuticals, and other industries.

With a projected population of 10 billion people, how will we feed the world in 2050? Climate change is altering our ability to grow crops and evolution is slow in improving plants for this planet. Synthetic biology could solve this major challenge by using engineering principles to redesign parts of plants, making them more responsive to environmental conditions. The result is "agricultural sustainability by design."

"Cutting edge technology can be used to redesign more efficient parts and circuits, for example, making plants more efficient in how they capture and use light in photosynthesis to make energy," said Wurtzel.

SynBio's concepts and technologies which incorporate the knowledge and methods of disciplines as diverse as molecular biology, biochemistry, and engineering––can empower plant scientists to re-imagine food and bio-based materials through a process referred to as "directed evolution."

In the course of natural selection, Wurtzel said, successive changes in a plant's DNA might alter the function of an enzyme or a protein and gradually transform inherent traits. A water-needy plant growing in an increasingly arid environment, for example, may evolve to be drought resistant. But this change would occur over millennia.

Through SynBio, the evolutionary process would take a matter of months.

"We could design an improved enzyme in the laboratory that took nature 350,000 years to evolve," Wurtzel said. "We have the tools to redesign enzymes or make better versions, which are then introduced back into plants."

A redesigned plant might use less water to make food––not because the normal chemical reaction has been improved, but because it contains entirely new mechanisms that more efficiently achieve that process.

SynBio presents an extraordinary opportunity, said Wurtzel, to develop crops that efficiently feed the planet, and avoid a future where food would be otherwise very limited. She emphasizes that SynBio projects must be planned and implemented in response to social needs, and with ethical, legal, and regulatory issues in mind.

"You're really building things where the end result is the same but how the plant does it may be completely different," said Wurtzel, who is a faculty member of the Plant Sciences doctoral subprogram at Lehman College and the City University of New York Graduate Center, and the Biology and Biochemistry doctoral programs. "And [you're] doing it much more efficiently, so at the end of the day you'll get more food, plants that can grow in worse conditions, and respond to changes in the environment, because of climate change or other environmental changes. The plants are smart, and they can respond to these changes."

The article developed from a think tank Wurtzel was invited to convene late last year by Cold Spring Harbor Laboratory, a research center on Long Island. Wurtzel is considered to be a visionary in plant sciences.

The group she assembled, which included scientists from academia, industry, funding agencies, high impact journals, and other stakeholders from around the world who see the potential of SynBio, began a wide-ranging conversation about how the world might be reimagined through the application of emerging technologies.

They concluded that significant adjustments must be made in the scientific sector, industry, and cultural attitudes if we are to develop SynBio beyond a handful of laboratories.

New infrastructure and facilities called biofoundries to accommodate SynBio research and production on an industrial scale will be necessary.

In education, "we will need to teach our biology students to think and work like engineers, using design, build, test, and learn cycles to address collective needs," said Wurtzel.

For scientists, meaningful SynBio research will require an entrepreneurial mindset, interdisciplinary collaboration, and responsible engagement with the public.

"Today we often do research to try to understand how things work," Wurtzel said. "Tomorrow's research will be more about solving problems."