Dancing in the Rain at Lehman Springfest 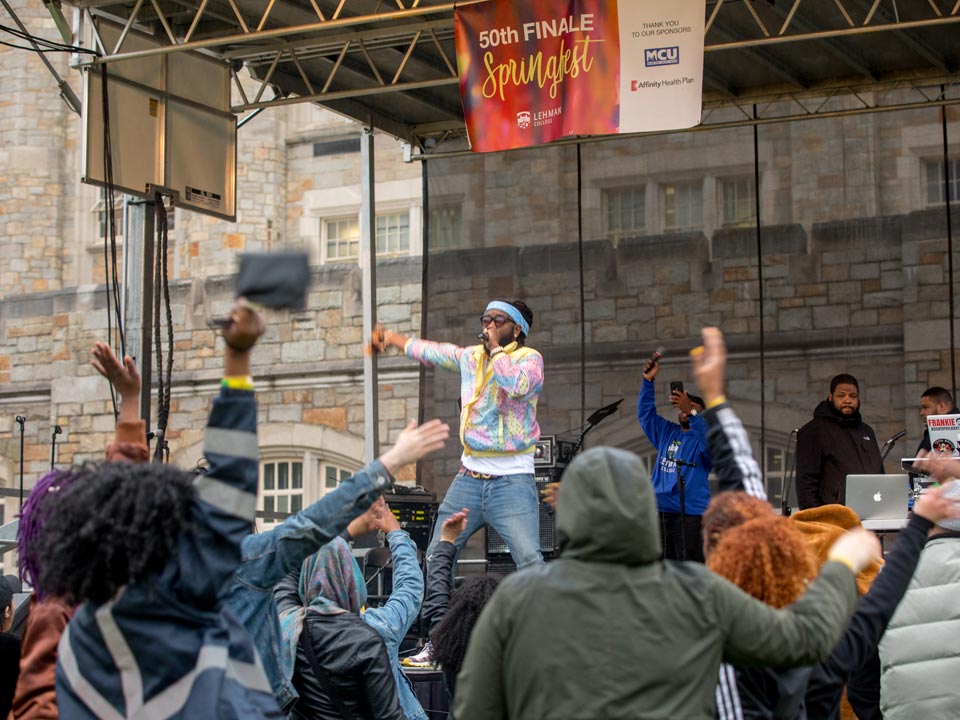 Dancing in the Rain at Lehman Springfest

Unseasonably cool and damp mid-May weather could not stop the Lehman community from enjoying the 50th Finale Springfest, a music and dance party held on the athletic field May 14.

Open to the public, the event marked the finale of Lehman College’s year-long 50th anniversary celebration. Springfest was also a featured event in Bronx Week 2019, an annual celebration of the borough’s cultural diversity.

2012 alumnus MC Vince Brady kept the afternoon’s energy going for five hours straight, drawing on his own Lehman experience to relate to the crowd.

"That's what were about at Lehman College. We're all about the love and all about supporting each other," Brady said.

In addition to the smooth sounds of the Lehman Jazz Ensemble, conducted by Allan Molnar, the audience was treated to original songs by Statik Vision, a rock band made up of Lehman students and alumni, which plays regularly around the Bronx.

Top-notch entertainment and a bouncy house were not the only draw for some participants.

Monique Dryden, a graduating senior, explained that she came out on this cold, wet day for more personal reasons.

"I'm not used to Lehman having parties like this, and I want to be a part of it," Dryden said. I want to meet school mates I haven’t seen for a while, and meet new school mates."

Lehman's role as a Bronx anchor institution was reaffirmed by Tracy McDermott, director of community services for the Bronx borough president's office. She presented a proclamation from Borough President Ruben Díaz Jr. to outgoing Lehman President José Luis Cruz, who gave a warm welcome to the performers and attendees.

Bronx City Councilman Andy King also spoke—but not before he demonstrated his dance talents onstage with a couple of dancers from the hip hop group. Wishing the students in the audience a productive summer, he encouraged them to stay involved in their work and their communities as a strategy for success.

While waiting for Trinidadian soca artist Lyrikal, who had been delayed in traffic, members of the audience entertained each other by doing the electric slide.

When Lyrical arrived, his energy and enthusiasm galvanized the small but energetic audience. As it began to drizzle they broke out their umbrellas, drew closer to the stage, and kept dancing.