At Convocation, President Lemons Sets Table for Successful Year Ahead 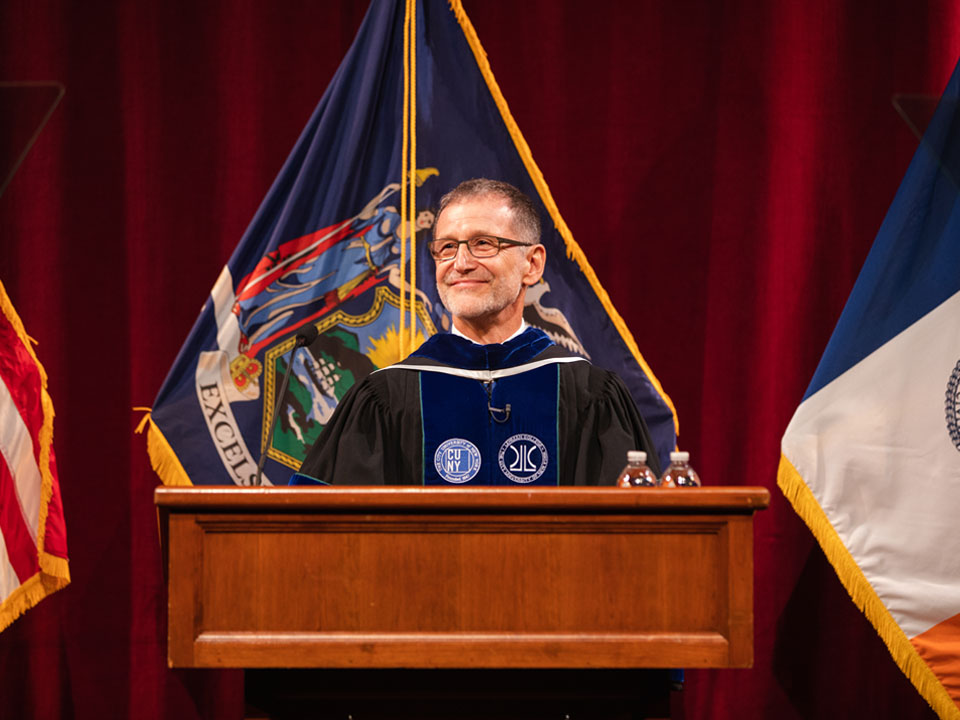 Photo of Daniel Lemons, President of Lehman College, at Convocation

The faculty, in full regalia, processed to the tune of Tito Puente’s “Oye Como Va,” performed by the Lehman Student Jazz Ensemble. Translated as “Hey, how’s it going?” the title was apt to the occasion; convocation is an opportunity for the entire college community to learn what has happened in the past year—and get a glimpse of what lies ahead.

“We've set a high bar for ourselves this year,” said Lemons.

He noted a recent study in The New York Times that evaluated factors for student success at over 370 institutions, including Lehman, and calculated probable graduation rates for each college. Lehman’s record stood out: its graduation rate was 9% higher than predicted.

“Lehman College was found to be doing much better than expected,” said Lemons,  “an indication of how much is right and powerful here.”

Lemons announced that, on the heels of Lehman’s successful reaccreditation by the Middle States Committee on Higher Education last spring, the college is undertaking a formal strategic planning process, involving task forces and committees composed of administrators, faculty, staff and students. The process began with a restatement of Lehman’s mission, vision, and values, and is expected to be finalized in the spring of 2020. Once completed, the strategic plan will guide the College’s priorities and goals for the next five years.

“One way to measure its success will be our progress related to the 90x30 challenge,” said Lemons. Granting 90,000 credentials and degrees by 2030, “underscores our engagement with major societal concerns such as socioeconomic inequality and systemic barriers that arise at the intersection of racism and sexism.”

Throughout his address, President Lemons referred to physician and writer Atul Gawande’s  2004 The New Yorker essay, “The Bell Curve,” which explores the elements that foster success in the medical field. Adopting the statistical bell curve as a metaphor, Lemons championed the college’s resolve to pursue bold propositions like 90x30.

“Factors that are difficult to quantify, like aggressiveness, consistency and ingenuity, can matter enormously,” said Lemons. “The news about Lehman College's higher-than-predicted graduation rate confirms that by one important measure we are on the right of the bell curve. We are punching well above our weight, and we should be pleased— but not content.”

After two successive years of increasing graduation numbers, the 90x30 goal is far from a pipe dream. Having exceeded graduation predictions by 9%, the college is now primed to do even better.

“A few of the colleges in the Times study achieved 20% higher than expected,” Lemons said. “And that’s the group we want to join—on the leading edge of the bell curve.”

With great ambitions come risks. Lemons related some words of wisdom about the importance of taking risks to reach goals—and the value of missteps along the way.

Quoting his father’s advice to him as a teen, he said, "‘There is no shame in making a mistake. The important thing in life is not that you make no mistakes, but that you figure out how to fix what’s gone wrong and go on.’

“We have a solid foundation,” Lemons continued, “which student success over recent years clearly shows. But we have more building to do, and that will involve innovation, mistakes, and overcoming them. We learn to do better as we go,” said Lemons. “There are big results when we do.”

Along with providing a snapshot of the present and a vision of the future, Lehman College convocations also recognize faculty and staff contributions in the past academic year.

The 2019 Teacher of the Year Award went to David Hyman, associate professor of English; and Adjunct Assistant Professor of Physics and Astronomy Richard Birritella received the Adjunct of the Year Award. Both were nominated for their inspired teaching and the attention they give to students outside of the classroom.

Four members of the Lehman staff were honored with the Outstanding Contribution to the College Award: Elkin Urrea, web applications analyst in the Division of Information Technology; Valerie McQueen, custodian; Lt. Alicia Cruz, assistant director of Public Safety; and Alice Michelle Augustine, director of the Office of Prestigious Awards.

The event featured the jazz ensemble’s rendition of Ray Charles’ “Ain’t That Love,” featuring student soloist Dania Miguel, and concluded with a brief address by Tarialy Hernandez, president of the Lehman College Student Government Association. Hernandez recounted her earlier experiences in college, and urged students to take advantage of all that Lehman offers in the service of their own ambitions.

“Allow this journey to have an impact on you,” she said.