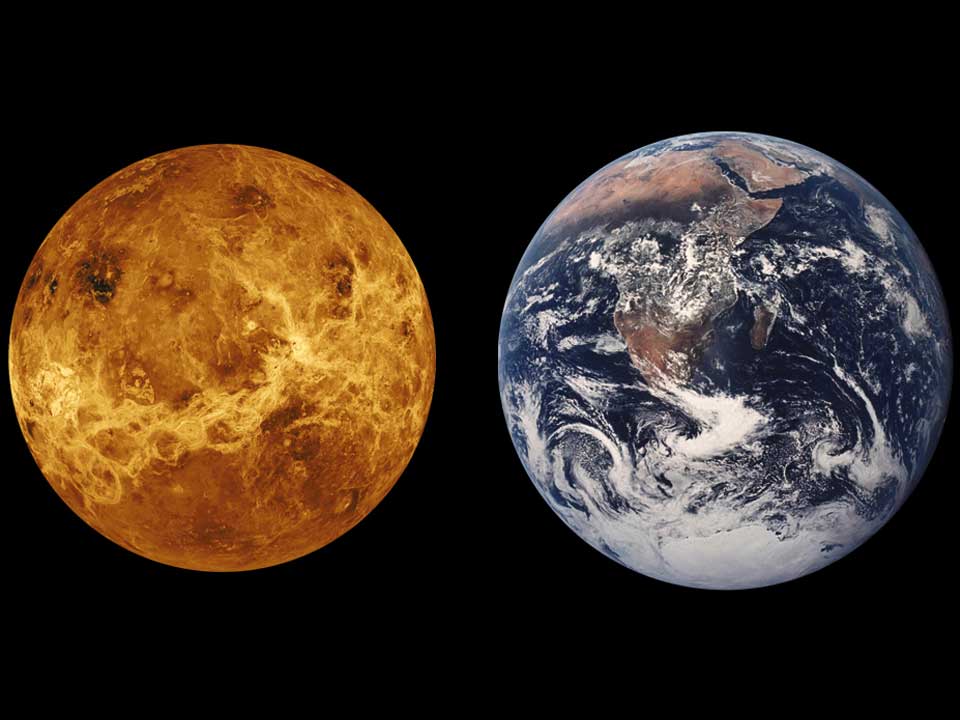 Jeffrey Bennett is an educator on a mission: to make the science behind climate change simple to understand. Bennet visited Lehman College on Tuesday, April 16, to explain the basics of global warming and offer solutions that skeptics and believers alike can agree on.

As part of a "Global Warming Tour," Bennett delivered his slide lecture titled "Global Warming Demystified" to a full house of Lehman faculty, staff, and students. Applying his astrophysics background, Bennett used the solar system to offer a cosmological perspective on a phenomenon usually discussed only in terms of our own planet.

The goal of Bennett’s talk was to provide a foundation for the science behind global warming that anyone could use to speak knowledgably about climate change.

Bennett focused on the similarities of Earth and Venus. The second planet from the Sun, Venus may have once been more like Earth is now, with a comparable atmosphere and potentially even liquid-water oceans. However, the planet’s atmosphere is now 96 percent carbon dioxide and has a surface temperature of 880 degrees.

Bennett explained that the reason Venus is far different from Earth now is because long ago the planet faced a runaway greenhouse effect, where the percentage of carbon dioxide in the atmosphere trapped heat at the planet’s surface causing any liquid water to disappear and the temperature to rise.

This same effect is what Earth is facing now. Bennett described how analysis of 800,000-year-old ice cores drilled from two miles below the Earth’s surface proved that carbon dioxide levels in our atmosphere remained relatively stable until the Industrial Revolution, when our use of fossil fuels exponentially increased.

Since that time, carbon dioxide levels in Earth’s atmosphere have continued to rise; Bennett noted that there is now 45 percent more carbon dioxide in our atmosphere that at any other time over the past 800 millennia.

Bennett used the example of Venus to show what could happen on Earth without any action to prevent a runaway greenhouse effect. He noted that our planet is already experiencing the effects of climate change: droughts, extreme weather, melting icecaps, and rises in sea level. He stated that we have to act now to slow down the process so that Earth doesn’t end up like its sister planet.

To end the program, Bennett asked the students in the audience to write a letter to their future grandchildren, explaining global warming, its impact on life today, and what they are doing to make the world better place for the next generation.