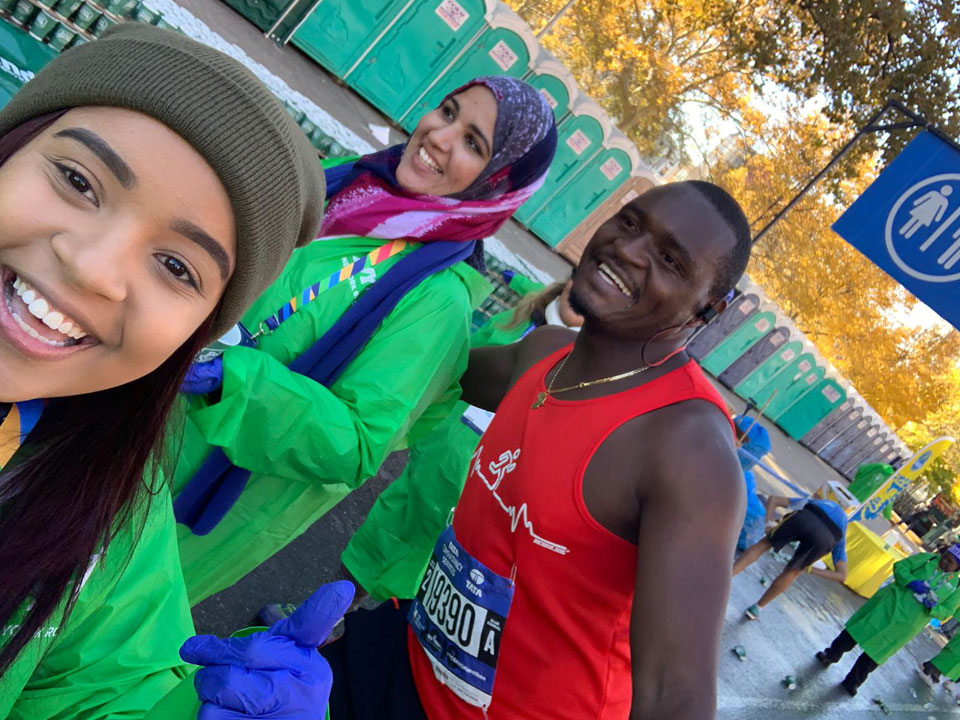 The 48th TCS New York City Marathon, held this year on Nov. 4 under clear skies and featuring more than 52,000 participants, was the perfect opportunity for a contingent from Lehman College to raise funds for student programs—and provide some much-needed encouragement during the race.

Three runners affiliated with Lehman—Filex Mwake, a master’s degree student in the Early Childhood Education program; José “Ozzie” Osborne, an international aid volunteer who first met Mwake while working in Kenya with Lehman L.I.F.E. students a few years ago; and Stanley Bazile, the college’s dean of students—competed in the marathon with the goal of raising scholarship funds for the Lehman L.I.F.E. Alternative Break Program in the Office of Community Engagement.

Bazile, who had run in the Chicago Marathon a month earlier, crossed the finish line at 3:26:17, followed by Mwake at 3:41:25 and Osborne at 4:18:16. More importantly, they raised over $2,500, thanks to donations made on a GoFundMe page online and a company match arranged by Lauren Braswell, a former teammate of Lehman’s Director of Community Engagement Amanda Dubois-Mwake.

“So many of our high-achieving students are in financial need, so it was my privilege to be able to help raise some money for them in just a few hours,” said Bazile, who came to Lehman from Kingsborough Community College in May 2017. “My motivation was knowing what our students go through to get to Commencement, their finish line. Throughout the race I kept thinking that I was actually doing the easy part compared to them.”

The marathon starts on the Verrazzano-Narrows Bridge in Staten Island and winds 26.2 miles through all five boroughs of New York City, ending in Manhattan. At Mile 20 in the Bronx, a place in the race where many contestants “hit the wall,” about 75 Lehman students volunteered at the Course Water Station, handing out drinks and replenishments while offering vociferous encouragement to the runners.

“It was great, at that point in the race, to see so many familiar faces,” said Mwake, who paused briefly for some photographs. “I was tired, but their smiles and voices gave me the inspiration to continue.”