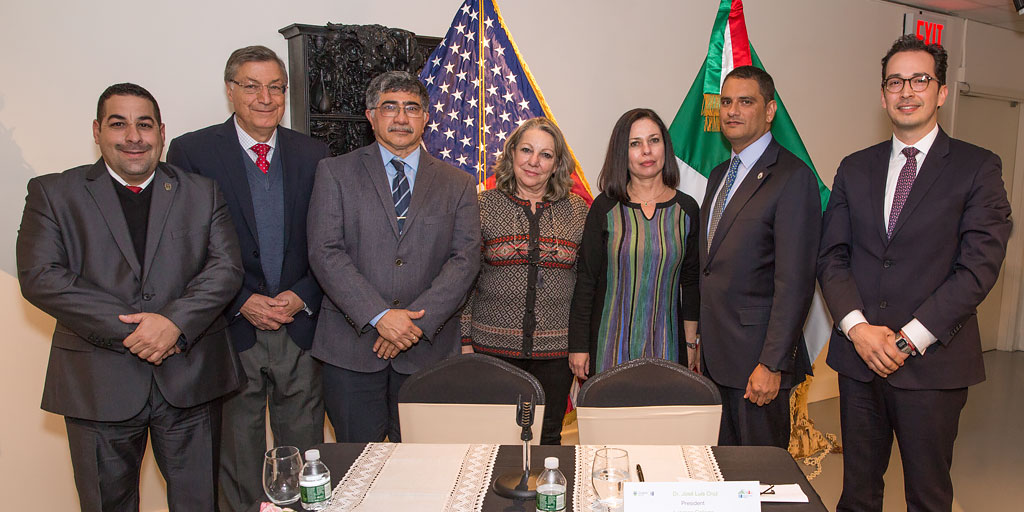 Lehman College has signed a new agreement with eight of Mexico’s top public universities to strengthen cooperation and promote mutual understanding. It is expected that these agreements will lead to student and faculty exchange opportunities as well as bilateral research projects.

The Statement of Shared Interests (SSI) signed on Thursday is an unprecedented agreement between Mexican universities and the Jaime Lucero Mexican Studies Institute at CUNY, housed here at Lehman. The Mexican Studies Institute seeks to foster research with and about Mexico and Mexicans in the United States, and collaborate with community-based organizations to support and empower the Mexican immigrant community.

Lehman College’s Office of International Programs and Global Partnerships has challenged the campus community to internationalize the curriculum, expand study abroad programs, and create opportunities for intellectual and intentional academic exchange with universities throughout the world. Most recently, Lehman has created its first partnership with multiple universities in Cuba.

“Today, we have made a commitment to partnership, to friendship, to scholarly inquiry, and to our mutual humanity,” said Teresita Levy, the director of Lehman’s International Programs and Global Partnerships program and a professor in the Department of Latin American, Latino and Puerto Rican Studies. “We are looking forward to enormous success and a long-lasting relationship founded on respect, intellectual curiosity, and appreciation for our institutional strengths and goals.”

Lehman College has deep ties with the nation of Mexico. In 2013 the College became the only official recipient of an Olmec Head statue in the U.S. The statue—a replica of “The King”—was the first such sculpture to be unearthed in San Lorenzo Tenochtitlán, Veracruz, Mexico in 1964. The replica was a gift from Mexico to celebrate the first anniversary of the Mexican Studies Institute at CUNY and was installed adjacent to Lehman College’s main plaza.

“I am convinced that one of the ways to promote mutual understanding and respect between two neighboring countries is through the advancement of bilateral research and faculty and student exchange,” said José Higuera López, the interim director of the Jamie Lucero Mexican Studies Institute at CUNY, who also spoke at the event. “With the convergence of these leading institutions of higher learning in Mexico, the Mexican Studies Institute at CUNY continues to consolidate efforts to create opportunities for students that will shape them as future leaders with a broader vision to take on shared global challenges.”

Dr. Maria Regina Martinez Casas, the academic director of CIESAS (Center for Research and Higher Education Studies in Social Anthropology, is excited about what the new partnership will mean for both institutions.

“We share cultural and linguistic interests, but we also share a history,” says Martinez Casas, referring to the diversity of Lehman students who have roots in Latin America. “In order to know each other better, we have to be conscious of this shared history and I think this partnership with Lehman will be a win-win relationship for Mexican institutions and the CUNY system.”