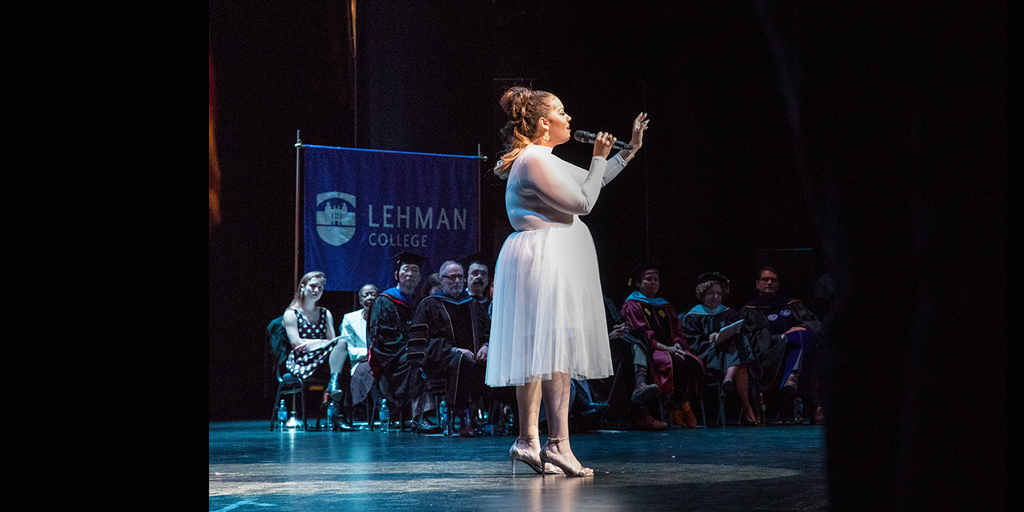 Singer Mariah Eskoh performing “A Moment Like This” at the College’s annual Honors Convocation on May 30.

They could have been contestants in the famous NBC talent show competition where Americans with myriad talents compete for a million dollars. Four Lehman students—three singers and one rapper—belted out two original ballads about chasing dreams written by Lehman’s Vice Provost for Academic Affairs Stefan Becker at the Honors Convocation on May 30.

Colette Ambo, who starred in Daniel in the Lions Den last spring and this year’s Rapunzel—both written by Professor Penny Prince (of the music department)—was the lead singer on “Wish You Well.” Joining her were backup singers Mariah Eskoh, who later sang “A Moment Like This,” and singer Sofia Subero. Half way through “Wish You Well,” rapper Bryan Paredes took the stage, infusing the song with a hip-hop flare.

Ambo is majoring in theatre with a focus on multimedia and performing arts. Originally from the Island of Dominica, Ambo studied music theory, classical guitar, and plays steel drums. Growing up she sang in church and school choirs, and was part of Dominica’s national folk chorus called Sixth Form Sisserou Singers, where she learned to develop her voice. She hopes to one day be on Broadway.

Eskoh, whose real name is Escobar, earned her Bachelor’s degree in theatre and music this June. She is a singer, songwriter, actress, and plus-size model. She said she enjoys singing R&B and Gospel music, as well as Broadway and Disney tunes.

The songs were even produced in-house at the Multimedia Center with audio engineer Steven Buenanotte, who recorded all guitar and bass tracks for the songs and, together with the singers, developed the vocal arrangements.

As for the songs, writing them is something of a pastime for Becker, who besides being the College’s Vice Provost, is also a professor in the Department of Earth, Environmental, and Geospatial Sciences. He plays the keyboard and has played with several bands over the years.

“I was happy to find out that we have such talent among our students here at Lehman,” said Becker. “All of them were enthusiastic to join me for the show we put up for the Honors Convocation. Getting prepared for the event was as exciting for me as the event itself. Colette, Mariah, Sofia, and Bryan are highly motivated and professional, and it has been a pleasure to work with them. I would do that again at any time.”