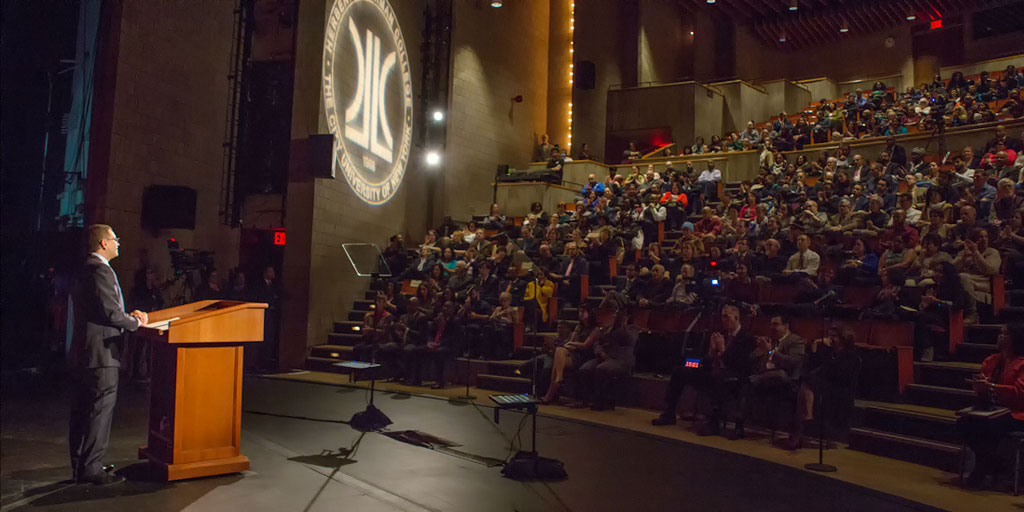 José Luis Cruz, president of Herbert H. Lehman College, The City University of New York (CUNY), announced a “grand challenge” to double the number of awarded degrees and certificates by 2030 during his “State of the College” Address on March 27, which he delivered in the Lovinger Theatre on campus in front of an audience comprised of administrators, faculty and staff members, students and guests. The event marked Dr. Cruz’s first “State of the College” address since taking office in August 2016.

President Cruz noted from the beginning of his speech that “the state of our college is strong, resurgent and energized.” While recognizing that Lehman College “would increase its impact, expand its reach and meet its full potential as an engine of opportunity, a vehicle of upward mobility, and a driver of transformative change,” he also remarked there could be a difficult road ahead in light of proposed federal budget cuts that would adversely affect the College’s mission.

After extolling a long list of accomplishments earned by Lehman College institutionally, which included new programs, increased enrollment and innovative public-private partnerships, President Cruz added that faculty members have earned national recognition for the quality of the College’s academic programs and the relevance of their research and creative work, and that students have been garnering research awards, scholarships and fellowships as graduation rates have trended upward. Lehman, he said, expects to grant over 3,300 degrees this year.

Because of its role as an anchor institution in the Bronx, and what he terms “the most important, mission-critical senior college of the world’s premier public urban university,” President Cruz highlighted the need to refocus attention and redouble efforts to eradicate educational, economic, and health inequities in the Bronx.

To achieve greater impact in this regard, President Cruz challenged the Lehman community to double the number of high-quality degrees and credentials that students presently are expected to earn by the year 2030 to a figure of 90,000—a plan he calls “90 by 30.” Doing so, he said, would “dramatically increase the likelihood that children currently attending K-12 schools in the Bronx and the surrounding region would benefit from the value of a Lehman education—either because they would earn a credential or degree themselves or a parent or relative would do so in this timeframe.” To facilitate an approach to the “grand challenge,” President Cruz stated that the College would be piloting a new, innovative crowdsourcing platform so Lehman community members can share ideas while “inspiring and empowering” each other.

Prior to President Cruz’s “State of the College” Address a new 60-second video advertisement for Lehman College was premiered for the audience. The advertisement was created and produced entirely in-house by faculty members and students from the College’s Multimedia Center.

Watch the "State of the College" Address